The iconic Victoria Falls Bridge spanning the Zambezi River between Zimbabwe and Zambia had an unwelcome visitor on Sunday – a two-metre-long crocodile. 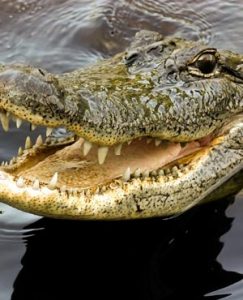 The crocodile had to be removed by a local expert who tried to put a noose round the snapping reptile’s deadly jaws, only to give up and use his T-shirt.

Watch the video below

A large group of tourists witnessed the spectacle and recorded it with their phones. Drivers crossing the bridge stopped to take a look.

The crocodile, its mouth agape to expose an impressive set of teeth, was discovered on Sunday morning lying beside the railway tracks. The place is popular with tourists, especially bungee jumpers who launch themselves off the 128-metre-high bridge into the gorge below.

Having failed to get a noose around the crocodile’s jaws, Teasdale threw his T-shirt over its head to disorientate it long enough for him to get a grip around its jaws with his bare hands, and to use insulation tape to bind the jaws together.

After its capture, the crocodile was released safely into the river.

Commented Avril Smith on Facebook: “The man of the moment. Crocodile Dundee would have been so proud.”

In other online comments Zimbabweans have mentioned the fact that the nickname of Emmerson Mnangagwa, the man who’s just been controversially returned to power is – wait for it – The Crocodile.