Zim election results would always have been disputed

There is a need for the country to consider extraordinary measures in the form of a power sharing arrangement between the Zanu-PF and the opposition alliance in order to deescalate political tensions in the country, writes Ralph Mathekga.

Source: Zim election results would always have been disputed | News24 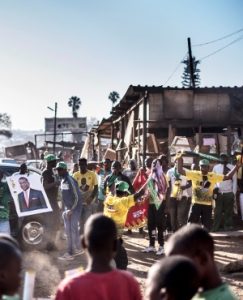 The developments around the election in Zimbabwe have created a serious dilemma for the Southern African Development Community (SADC) resulting in the country’s future hanging in the balance.

By holding elections nearly seven months after Robert Mugabe was forced to resign as president following the military coup late last year, expectations were that the situation in the country would normalise and allow for the reconstruction of the shattered economy.

The opposition alliance in Zimbabwe is disputing election results, accusing the Zanu-PF of rigging the votes. Mugabe’s successor, and the supposed President-elect Emmerson Mnangagwa, has also not been shy in showing who is in charge in the streets of Zimbabwe by unleashing the military on those who protest the election results.

Some neighbouring countries such as South Arica have whispered congratulatory messages to Mnangagwa and his party for winning the elections. The messages are noticeably not too loud, because no one wants to completely stake their reputation on elections that could later be ruled to be a sham in case there is a formal complaint by the opposition through the courts.

The current situation in Zimbabwe shows that for the political situation to normalise, it will take more than just elections. Simply put, Zimbabwe is in a position where things have gotten so bad over the years that the country cannot hold elections of which the results are acceptable to all.

There is a need for the country to consider extraordinary measures in the form of a power sharing arrangement between the Zanu-PF and the opposition alliance in order to deescalate political tensions in the country.

Whether or not the elections were free and fair, there is an undeniable reality that the military in Zimbabwe would not accept results that would see the opposition party removing the Zanu-PF from power.

By undemocratically removing Mugabe from power last year, the military sent a signal that they have a right to “correct” any political situation whenever they saw fit. It is therefore naïve to imagine that the military would remove a longstanding president only to allow for the opposition to win the elections a few months later.

If the military favoured a democratic process including a free expression of the will of the people through voting, it would have allowed for elections immediately after ousting Mugabe, instead of allowing the Zanu-PF to first settle in.

On the other hand, the opposition seems to have exaggerated its ability to win the elections. The opposition wants change and tends to presume that the majority of voters share their idea of change. The only way in which change could come about for them is if the Zanu-PF loses elections and the opposition takes over.

Whether or not the opposition had a realistic expectation to win the elections, it is clear that they were not ready to accept defeat, be it fair or unfair. They had already made it clear before the elections that if they lost, that would mean the votes were rigged.

It is indeed worrying when two competing political parties participate in elections without entertaining the possibility of losing at the polls. The Zanu-PF would not stomach a defeat while the opposition did not even have the word defeat in their vocabulary.

Either way, the results of the election were bound to be disputed either by the opposition or the ruling Zanu-PF. It does not take much for a country to hold elections; just about anyone can do it. The main difference, however, is how to ensure that election results are accepted as legitimate.

The most realistic way to deal with the current impasse in Zimbabwe is to work out some form of power sharing between the Zanu-PF and the opposition: again. This is because the only results that will be acceptable to the warring parties are the elections that are prepared by both the opposition and the ruling party in a power sharing arrangement.

– Ralph Mathekga is a Fellow at the SARChI Chair: African Diplomacy and Foreign Policy at the University of Johannesburg and author of When Zuma Goes and Ramaphosa’s Turn.