WATCH: Why are there so many pythons in Harare?

Source: WATCH: Why are there so many pythons in Harare? | News24

Harare – Snake expert Ben Vermeulen of Harare-based Reptile Rescue says he has been called in to remove nine pythons since January, and that python sightings are now much more frequent. 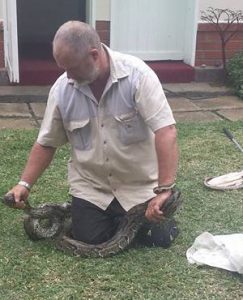 Watch below, a short video clip of a python that was caught by Reptile Rescue being released in Harare

“What we’re finding is that a lot of the snake species are migrating into Harare because of the explosion in the rat population, and the Gambian (pouched) rats that we have,” Vermeulen told News24. No-one seems to know how Gambian rats ended up in Harare: they’re not indigenous to Zimbabwe. Local rats are also proliferating.

In one dramatic picture shared recently, a large python was seen sunning itself on top of a garden wall in Harare’s leafy Mount Pleasant suburb. 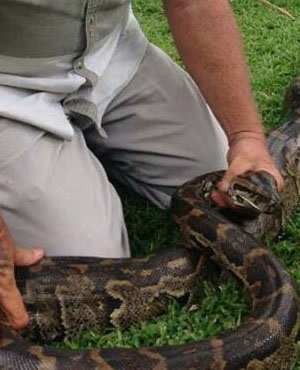 10ft Python that was on The Chase in Mount Pleasant. (Reptile Rescue)Pythons are a protected species in Zimbabwe: killing them can attract a mandatory nine-year jail term. So residents are told not to take things into their own hands.

Vermeulen releases all of his captured pythons in uninhabited areas close to water.

He said the proliferation of snakes in Harare should not create unnecessary alarm. Most people will only ever see 5% of the city’s snakes.

“It’s only when snakes have been disturbed or are on the move during the day that people see them. The snake population is controllable,” he said.