WATCH: Will it be darkness at noon for defiant Mugabe? 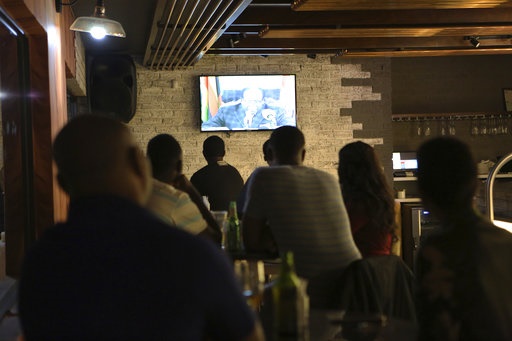 Watch the televised address late Sunday, in which the 93-year-old defied expectations that he would bring the curtain down on his reign.

Source: WATCH: Will it be darkness at noon for defiant Mugabe? – ENCA 20 November 2017

Robert Mugabe addressed the nation on Sunday night after the governing party Zanu-PF made it clear he must resign. The expected resignation did not happen, but there’s suspicion he may have read a speech in breach of an agreement with the army chiefs. Video: eNCA

Every man casts a shadow; not his body only, but his imperfectly mingled spirit… short at noon, long at eve – Henry David ThoreauHARARE, Zimbabwe – Zimbabwean President Robert Mugabe will discover whether the long shadow he has cast over the country, which he extended on Sunday evening by defying expectations and refusing to resign, will be finally and irrevocably shortened at noon on Monday.

Mugabe’s Zanu-PF promised to impeach him if he failed to step down and after his shock insistence he still holds power despite a military takeover, his hours look to be numbered.

His speech provoked anger and disbelief among crowds who had gathered in bars and cafes to watch, and raised concerns that Zimbabwe could be at risk of a violent reaction to the political tensions.

The speech capped an extraordinary weekend that saw Zimbabweans jubilant at the prospect of his demise and venting their anger in ways that, just a week earlier, would have been brutally punished.

But their joy quickly turned to despair as Mugabe seemed to brush aside the turmoil — blithely declaring he would chair a top-level meeting of the party that had just disavowed him.

“The (ruling Zanu-PF) party congress is due in a few weeks and I will preside over its processes,” he said.

Chris Mutsvangwa, head of the influential war veterans’ association, called for protests and demanded that Mugabe be impeached.

“That speech has nothing to do with realities. We will go for impeachment and we are calling people back to the streets,” he told AFP.

The crisis erupted on November 13 over a factional squabble to succeed the ailing president.

But Mnangagwa, 75, has close ties to the army and the powerful war veterans.

After he fled abroad, the army took over the country and placed Mugabe under house arrest.

They insisted this was not a military coup, but rather an operation to root out “criminals around (Mugabe) who are committing crimes”. That was seen as a reference to supporters of the highly ambitious first lady.

In scenes redolent of Zimbabwe’s independence in 1980, crowds thronged the cities, waving national flags and chanting for Mugabe to resign.

The pendulum swung further against the president on Sunday, when ZANU-PF dismissed him as its leader and demanded he resign as head of state, naming Mnangagwa as the new party chief. 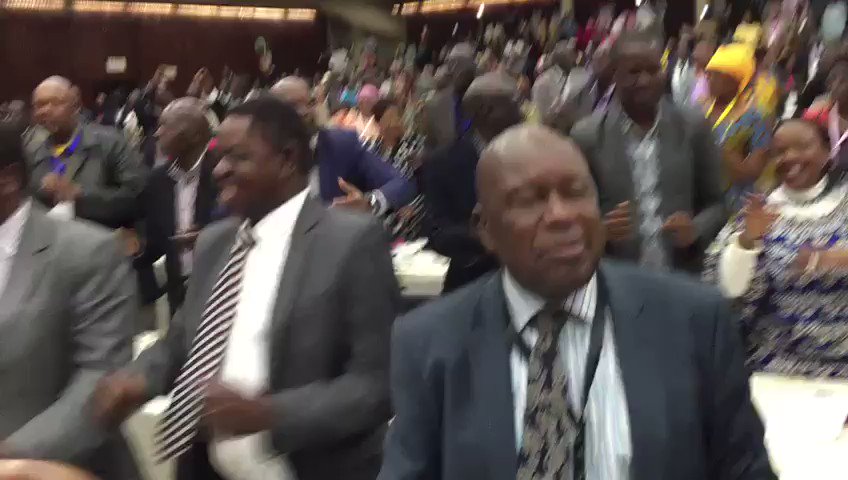 This is Mugabe’s political party dancing after sacking him & expelling his wife. Today is historic in Zimbabwe…

But impeaching Mugabe, who is the only leader most Zimbabweans have ever known, would require a two thirds-majority in both houses of Zimbabwe’s parliament which is due to resume on Tuesday.

He made no reference to the hostile chorus calling for him to go and shrugged off last week’s dramatic military intervention.

“The operation I have alluded to did not amount to a threat to our well-cherished constitutional order nor did it challenge my authority as head of state, not even as commander in chief,” he said mildly.

Instead he urged harmony and comradeship to tackle the country’s problems.

“Whatever the pros and cons of how they (the army) went about their operation, I… do acknowledge their concerns,” he said.

“We must learn to forgive and resolve contradictions, real or perceived, in a comradely Zimbabwean spirit.”

Derek Matyszak, an analyst at the Pretoria-based Institute for Security Studies, said Mugabe’s address raised the stakes even further.

“It’s absolutely astounding. Mugabe behaves as if nothing ZANU-PF said this afternoon was of any relevance,” he told AFP.

“Where they’ll go from here? They’ll proceed with the so-called impeachment process.”

Some sources suggest Mugabe has been battling to delay his exit in order to secure a deal that would guarantee future protection for him and his family.

Mugabe was a key figure in the war that wrested power from the white colonial government that ran the former Rhodesia.

He took office as prime minister in 1980, surfing a wave of goodwill, and later became president.

But his reputation was swiftly tarnished by his authoritarian instincts, corruption, cronyism and economic ineptitude, and eventually his country was shunned by the West.

Output has halved since 2000 when many white-owned farms were seized, leaving the key agricultural sector in ruins.