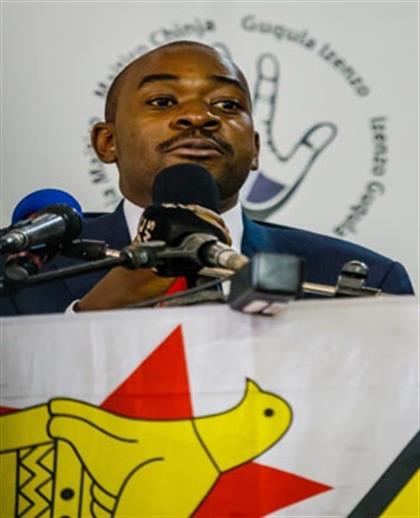 Opposition leader Nelson Chamisa on Wednesday said Zimbabwe’s election was threatened by fraud and accused electoral authorities of bias, but said his MDC party would not boycott the vote.

The Zimbabwe Election Commission (ZEC) was “biased and has lost the confidence of the people of Zimbabwe,” Chamisa told a press conference ahead of the July 30 vote.

“Even at this late stage, there is no evidence whatsoever (of) how many ballot papers were printed, where they were printed and their security,” Chamisa charged.

“There has been a consistent negation of international standards,” he said, adding: “We have a ZEC that has chosen to throw away the whistle as a referee and joined another team.”

But he said that his party would not boycott the vote, arguing that it would still win against President Emmerson Mnangagwa and the ruling Zanu-PF.

It is the country’s first election since Robert Mugabe was ousted in November.

“Mnangagwa knows defeat is staring in his face… We are going to turn out in our numbers (to vote) and defeat them.”

Elections during Mugabe’s 37-year reign were regularly marred by fraud and violence, but Mnangagwa has vowed to hold a peaceful and fair vote.

Mnangagwa, a Zanu-PF loyalist and former ally of Mugabe, has invited international observers – including previously-banned European Union and Commonwealth teams – to assess the polls.

Chamisa, 40, took over leadership of the MDC after a bitter succession battle followed the death of veteran party leader Morgan Tsvangirai in February.

In 2008, Tsvangirai pulled out of the presidential run-off vote after attacks orchestrated by the state and Zanu-PF claimed the lives of at least 200 of his supporters.

Monday’s election comes after Mugabe, now 94, was forced to resign following a brief military takeover in November that ended his 37 years in power.

Mnangagwa’s critics say that he relies on the support of the military and that the same corrupt elite from Mugabe’s era still have their grip on power.

Foreign Minister Sibusiso Moyo told reporters in Harare on Wednesday that the government was committed to a clean election.

“Such a peaceful, free and fair election like this one… will obviously be a marvel in the rest of the international community,” he said.

“If there is anything which is not appropriate that has got to be taken to court.

“We as government as a matter of policy do not approve any form of intimidation, any form of voters coercion.” Both candidates have campaigned on a pledge to revive the economy, which was shattered under Mugabe. The seizure of white-owned farms wrecked the agriculture sector and triggered hyperinflation and economic collapse.

Mugabe, in increasingly frail health, was forced to resign when the military stepped in and Zanu-PF threatened to impeach him after he tried to line up his wife Grace as his successor.

The United Nations on Tuesday warned of growing concern over alleged intimidation and threats of violence in the runup to the historic election.

“We call on the authorities – and political parties and their supporters – to ensure that the elections are not marred by such acts,” the UN High Commissioner for Human Rights (UNHCR) said in a statement.