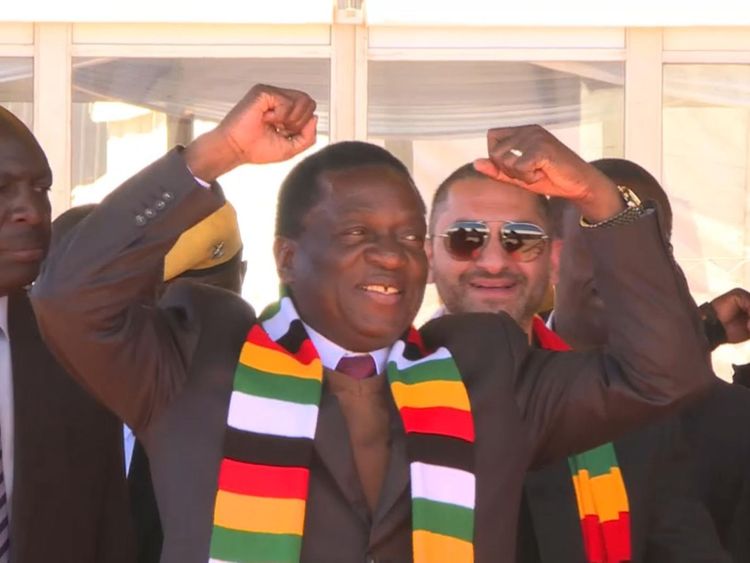 He is the man with the vibrant, multi-coloured scarf and he is promising the people of Zimbabwe nothing short of a miraculous transformation.

Emmerson Mnangagwa is a 75-year-old revolutionary-turned-politician and we watched him move and groove as he took the stage at a hustings near the dusty town of Kwe Kwe.

He is up against Nelson Chamisa, head of the Movement for Democratic Change (MDC) opposition coalition.

Addressing a crowd of several thousand who gathered to see him at a new chromium mine, he told them they were going to get democracy and a serious rise in their standard of living.

“We are saying that Zimbabwe will never be the same again,” said Mr Mnangagwe.

“We have a vision (of) becoming a middle-income economy by 2030 and we are breaking ground on new (infrastructure). I am Mr Ground-Breaking.”

That got a hearty cheer from the people who had been bussed in for the speech by Mr Mnangagwe’s ruling Zanu-PF party, and in an exclusive interview for Sky News, Mr Mnangagwe said he was committed to holding open and peaceful elections.

“The new (approach) does not tolerate any violence. Things have changed. No more violence. We have told the entire international community that our elections are going to be free, fair, transparent and credible.”

When it comes to credibility, Mr Mnangagwa does have something of a problem.

The 75-year-old held various posts in Robert Mugabe’s regime and was considered one of his closest aides.

He led the security services in the early 1980s when at least 10,000 people from Ndebele tribe were killed by the Zimbabwe Army in the Gukurahundi massacre.

He ran Mr Mugabe’s bloody election campaign in 2008 when the dictator lost the first round of voting to the opposition MDC.

After a wave of deadly violence and intimidation, the MDC decided to pull out of the contest.

I put it to Mr Mnangagwe that some voters would be loath to trust him.

“You have promised the people of Zimbabwe a new dawn, new freedoms and prosperity. But you are closely associated with the old regime – so why should the voters trust you?”

He responded: “You are saying the old regime. I can assure that the old regime brought independence to this country and (the people) were very grateful. We walked through difficult conditions.”

But the Zimbabwean president did not want to focus on the past.

Despite the president’s guarantee of free and fair elections, civil rights organisations such as We The People – formed by 7,000 volunteers around the country – have recorded hundreds of incidents of political violence and intimidation.

But that is something Mr Mnangagwe disputes.

In fact, he says he has not received information about a single incident.

“On social media people can sit in (their) houses drinking his whiskey and say anything they want.

Certainly, the atmosphere is more relaxed than elections held under Mr Mugabe’s control and the man who ousted him six months ago is absolutely confident of victory.

“I am extremely happy with the response I receive from east to west – (from) south to north. Monday is the deciding factor. You will see wonders when Zanu-PF again, will romp to victory thunderously.”

With that, he banged the table and strode out of the room as a group of onlookers applauded him.

President Mnangagwe has committed himself to the first real electoral contest in Zimbabwe in over 20 years – but he can see only one winner.