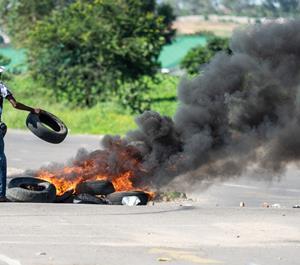 Source: We were inside Zimbabwe after the Government cracked down on Protestors – VICE News (MUST WATCH) – Nehanda TV

Things were supposed to be different in Zimbabwe after its former strongman ruler, Robert Mugabe, was deposed in a bloodless coup in 2017.

But once again, people in the southern African country are living in fear after enduring the worst state violence in over a decade, which left at least 12 people dead, hundreds more injured and over 1,000 detained.

For many, hope of a bright future has already been shattered.

Signs of disappointment in the state could be seen in December, when small scale demonstrations over stagnant wages began. The protests were a reaction to crippling inflation rates, which had reached a 10-year high, and the toll it was taking on everyday Zimbabweans.

But it was President Emmerson Mnangagwa’s decision to raise the price of fuel by 150 percent, that brought thousands onto the streets.

Overnight, Zimbabwe became one of the most expensive places in the world to buy fuel, and the people were letting the government know how they felt about it — some set fire to tires in the road and others were caught looting.

The state responded with brutal force. The government shutdown the internet, and deployed soldiers and youth militia from the ruling party, Zanu-PF, who went town to town, street to street, door to door, beating men, women and children.