We will bring back US dollar: MDC

Source: We will bring back US dollar: MDC – NewsDay Zimbabwe September 30, 2019 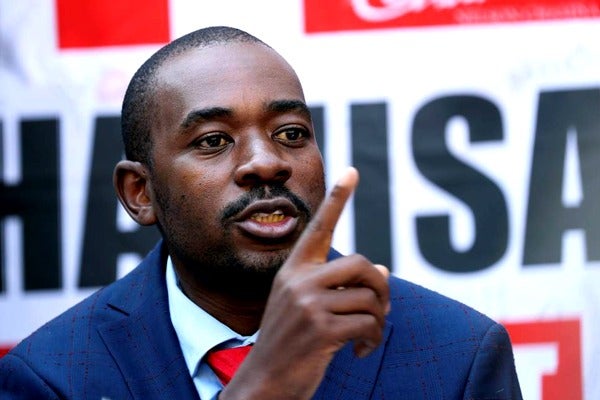 The Nelson Chamisa-led MDC has pledged it will bring back the multi- currency regime and withdraw the local currency until a time the productive sector was resuscitated if it comes into government.

Speaking at the MDC’s 20th anniversary celebrations at Rufaro Stadium on Saturday, Chamisa said his party had a plan to end the economic woes afflicting the country in 30 days.

“We are ready to resolve the national crisis because we have a solid team. Once in power, we will resolve all the problems in just 30 days … We will return the US (United States) dollar as a currency of trade and we will remove the bond note until we resolve the issue of productivity then we come back to the local currency,” he said.

In Chamisa’s view, Zimbabwe’s crisis is hinged on legitimacy issues, corruption and looting of national resources by those in government.

“Corruption in this country is now a threat to national security. There are cartels stealing national income and wealth and externalising it,” he said.
The MDC’s ambitious strategy to fill Rufaro to the rafters failed with only three out of four bays being filled.

An attempt by police to dampen the festivities by sealing off access to the party headquarters did not work as Mbare was turned into a sea of red.

Party secretary-general Chartlorn Hwende says he was impressed by the attendance given the harsh economic environment and high cost of transport.

“You will appreciate that our people are facing the burden of misgovernance at the hands of a clueless Zanu PF government. There is no fuel in the country and transport costs are beyond the reach of many, but our supporters sacrificed all else without help from the party or given coffers to come and make a statement. We are proud of them,” Hwende said.

Meanwhile, National Constitutional Assembly (NCA) leader Lovemore Madhuku speaking to the NewsDay said both the MDC and Zanu PF had no clue as to how they could take the nation forward, saying a new force has to come into play.

“You have Zanu PF, on the one hand, whose methods are not working and on the other hand, the MDC Alliance that is made up of totally arrogant leaders who are misplaced. They will say one thing today, another tomorrow and keep changing and believe that they have a monopoly of opposition support … I don’t see Zimbabweans in 2023, still thinking that they are choosing between Zanu PF and MDC. By 2023, everyone would have seen that there is no leadership coming out of the MDC Alliance,” Madhuku said.

He said the current government had no idea on how to take Zimbabwe forward despite the fact that they continue to win by-elections.

“You find people in government who have no clue as how to change the economic situation, how to turn around the economy, that is what we have at the moment. So there is no new dispensation at all … we must invest heavily in conscientising the majority of our people. I believe the only way forward for this country is to make people alert because despite what these people in government are doing they still enjoy support. Go to a by-election, you find that the majority of those who turn out to vote, vote for them notwithstanding the economic hardships, notwithstanding political repression. When next time around we have an election people must vote out this government that’s the way to go,” Madhuku said.