Weeks After Mugabe Fell, Zimbabwe Remains in the Army’s Grip 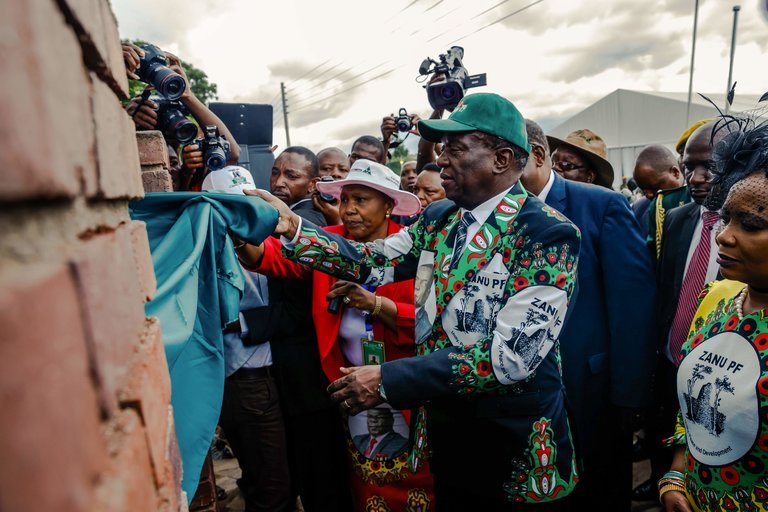 HARARE, Zimbabwe — Three weeks after the 37-year rule of Robert Mugabe came to an end, Zimbabwe’s new military-backed leaders made moves on Friday to improve economic relations with the West, as they continued to consolidate power ahead of elections next year.

“We call for the unconditional lifting of the political and economic sanctions, which have crippled our national development,” said the new president, Emmerson Mnangagwa, who led the annual congress of the governing party, ZANU-PF, this week.

Mr. Mugabe long whipped up domestic support by blaming sanctions imposed by Western governments for Zimbabwe’s economic collapse, though most economists point instead to mismanagement of the resource-rich economy.

Mr. Mnangagwa, 75, who is serving the remainder of Mr. Mugabe’s term — which was scheduled to end next August — promised “credible, free and fair” elections. Western officials have indicated that Zimbabwe would be considered for loans from the International Monetary Fund and other creditors only after holding free elections as well as showing improvement in human rights and other areas.

Opposition parties and human rights groups say that despite Mr. Mnangagwa’s promises of a new Zimbabwe, he has hewed to his predecessor’s strategies.

His new cabinet is composed of loyalists, many of whom served Mr. Mugabe. He plucked two from the armed forces, including his foreign minister, Sibusiso Moyo, the general who announced the military takeover of Mr. Mugabe’s government.

The presence of the army, which has been used in the past to tilt elections in the governing party’s favor, is still felt across the country. Soldiers remain deployed at checkpoints on roads and in towns and the countryside — often performing duties that they are not legally allowed to assume in peace time, critics say.

The army placed Mr. Mugabe under house arrest on Nov. 15 and eased the way for Mr. Mnangagwa to assume power.

“Why has Mnangagwa not quickly returned the soldiers back to the barracks?” asked Okay Machisa, vice chairman of the Peace Project. “If people are being beaten by soldiers and the head of state does not say a word, you start to wonder why. We want a country that is not militarized.”

The continued military presence is particularly worrisome because of the upcoming elections, which are likely to be held in August. In the past, Mr. Mnangagwa, who was Mr. Mugabe’s right-hand man for decades, is believed to have orchestrated the rigging of elections. Soldiers played a key role in coercing voters to support the governing party, especially in rural areas.

The intimidating presence of soldiers in rural areas, where voter registration is now taking place, was an inauspicious start to the election season, said Andrew Makoni, chairman of the Zimbabwe Election Support Network.

Mr. Makoni said that the new government should appoint an independent leader for the Zimbabwe Electoral Commission, and invite credible international election monitors. “All of this depends on the political will of the new establishment,” he said.

At ZANU-PF’s congress, Mr. Mnangagwa’s staunchest allies showed little willingness to accommodate outsiders. Last year, Mr. Mugabe’s wife, Grace, dominated the congress, which was split between her supporters and those of Mr. Mnangagwa. While Ms. Mugabe and some of her top allies have been purged from the party, other former rivals have now united behind Mr. Mnangagwa.

“ZANU-PF is stronger than before,” the Rev. Morris Brown Gwedegwe, a party member who founded a church in 2014, said, adding that opposition parties were “a necessary evil.”

Mr. Mugabe, 93, who has made no comment since his resignation, is in Singapore where he has regularly received medical treatment. But even in his absence, Mr. Mugabe’s presence was felt.

While shouting support for the new president, a senior member said, “Forward with President Robert Mugabe!” before correcting himself. Even Mr. Mnangagwa, in introducing his wife, began addressing her as Grace Mugabe before he, too, caught himself — to much laughter from the audience.

Party leaders strongly supported Mr. Mnangagwa’s call for the “unconditional lifting” of sanctions. In the past two decades, the United States and European governments have imposed sanctions following the Zimbabwean government’s violation of human rights, including the violent seizure of white-owned farms. Zimbabwe, which became ineligible for multilateral loans after defaulting in the late 1990s, must clear $1.8 billion it owes to the I.M.F., the World Bank and the African Development Bank before it can be considered for fresh loans.

At a United States Senate hearing on Zimbabwe this week, a State Department official on African affairs, Stephanie Sullivan, said that the United States expected “economic and political reform” in Zimbabwe — a call that immediately caused an angry backlash among Mr. Mnangagwa’s allies.

“I hate the idea that U.S.A. wants to be a prefect of all nations,” said Victor Matemadanda, a war veterans leaders and ZANU-PF’s political commissar. “Let them fix all the wrong things with Trump and get to us later.”

Harry K. Thomas Jr., the American ambassador to Zimbabwe, said he welcomed Mr. Mnangagwa’s pledge to hold free, fair and nonviolent elections. Mr. Thomas said he hoped that international observers, including from the United States, would be allowed to monitor next year’s polls.

“We’ve been promised that the days of name-calling and blaming are over,” Mr. Thomas said in an interview. “We hope that’s true because that won’t help people.”

Kembo Mohadi, the defense minister, repeated the president’s statement that sanctions must be removed without conditions.

“What have we done wrong as a new government?” Mr. Mohadi said.

Asked why soldiers had yet to return to their barracks, he said that the army was still carrying out its mission of righting the governing party, which had been led astray by a cabal led by Ms. Mugabe. The military has called its ousting of the old government under Mr. Mugabe as “Operation Restore Legacy.”

“Until that legacy is restored,” the defense minister said, “our presence will be seen.”