What is the treatment for cholera? 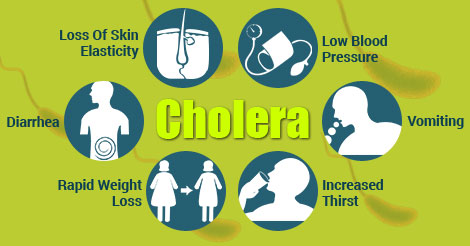 Source: What is the treatment for cholera? | The Herald September 15, 2018

The Centres for Disease Control (and almost every medical agency) recommends rehydration with ORS (oral rehydration salts) fluids as the primary treatment for cholera.

The CDC follows the guidelines developed by WHO (World Health Organisation). (See table below)

Reassess the patient every one to two hours and continue hydrating. If hydration is not improving, give the IV drip more rapidly. 200 mL/kg or more may be needed during the first 24 hours of treatment.

After six hours (infants) or three hours (older patients), perform a full reassessment. Switch to ORS solution if hydration is improved and the patient can drink.

In general, antibiotics are reserved for more severe cholera infections; they function to reduce fluid rehydration volumes and may speed recovery. Although good microbiological principles dictate it is best to treat a patient with antibiotics that are known to be effective against the infecting bacteria, this may take too long a time to accomplish during an initial outbreak (but it still should be attempted); meanwhile, severe infections have been effectively treated with tetracycline (Sumycin), doxycycline (Vibramycin, Oracea, Adoxa, Atridox, and others), furazolidone (Furoxone), erythromycin (E-Mycin, Eryc, Ery-Tab, PCE, Pediazole, Ilosone), or ciprofloxacin (Cipro, Cipro XR, ProQuin XR) in conjunction with the following antibiotics in conjunction with IV hydration and electrolytes:

Many antibiotics are listed; however, because of widespread antibiotic resistance, including multi-resistant Vibrio strains, antibiotic susceptibility testing is advised so the appropriate antibiotic is chosen. In addition, quinolones (for example, ciprofloxacin, norfloxacin) should not be used in children if other antibiotics can be effective because of possible musculoskeletal adverse effects.