What to Expect From Zimbabwe’s First Vote Post-Mugabe 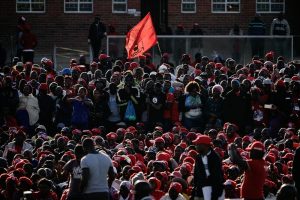 Source: What to Expect From Zimbabwe’s First Vote Post-Mugabe – Bloomberg

For the first time since white minority rule ended in 1980, Zimbabweans won’t have the option of voting for Robert Mugabe when they choose their next leader. After driving the southern African nation to economic ruin, Mugabe unsuccessfully tried to line up his wife to succeed him and was forced to quit in November when the military briefly seized power and the ruling party threatened to impeach him. His former deputy and successor, Emmerson Mnangagwa, is among 23 candidates running for the presidency on July 30. The only other strong contender is Nelson Chamisa, leader of the main opposition Movement for Democratic Change. While violence and intimidation marred Zimbabwe’s last three elections, this year’s campaign has been mostly peaceful.

1. Will the election be free and fair?

Not according to the opposition. It says controls over the ballot papers are inadequate, dead and under-age people are included on the voters’ roll, and the electoral commission is biased in favor of the ruling Zimbabwe African National Union-Patriotic Front. The commission has shrugged off the complaints, saying it’s complied with the law. Mnangagwa has vowed the election will be credible and has invited international observers to monitor the vote for the first time since 2002. Forty-five percent of 2,400 adults surveyed by research company Afrobarometer between June 25 and July 6 said they were concerned incorrect results would be announced, while 44 percent were worried about post-election violence.

Mnanagagwa probably has the edge, especially if there is foundation to the opposition complaints of foul play. Forty percent of respondents in the Afrobarometer survey said they would vote for the ruling party, 37 percent backed a seven-party alliance led by the MDC, 3 percent supported other parties, and the balance were undecided. A run-off election will be held on Sept. 8 if no candidate wins more than half the vote.

3. Would an opposition win be respected?

That’s difficult to say. In May, the Harare-based NewsDay newspaper cited Deputy Finance Minister Terence Mukupe as saying the military won’t let Chamisa rule the country. The Ministry of Information shot down the report, saying the comments, if accurate, were “reckless” and didn’t represent the government’s position. The military and police sided with Mugabe in previous elections and the opposition accused them of aiding efforts to rig the results. However, General Philip Valerio Sibanda who was named commander of the armed forces in December, has a reputation for being apolitical. Forty-four percent of the respondents in the Afrobarometer poll said they feared the military won’t respect the results if the MDC wins. The security forces have been placed on high alert ahead of the election, a precaution Home Affairs Minister Obert Mpofu said is necessary to avert violence and disruption.

4. What are Zimbabwe’s economic prospects after the election?

Whoever wins will face a mammoth task resuscitating a dysfunctional economy. In 2000, Mugabe’s government authorized the often-violent seizure of about 4,500 mostly white-owned commercial farms to redistribute to black citizens in a land-reform program that resulted in a collapse of agricultural output. Mass emigration and hyperinflation followed. The unemployment rate is estimated at more than 90 percent. A cash crisis limits withdrawals from banks and the government’s ability to pay state workers on time. While rebuilding will take years, a credible election could unlock pent-up investment demand in agriculture and mining. The country was once known as an agricultural powerhouse, has the world’s biggest platinum reserves after South Africa and also has deposits of gold, coal and iron ore.

5. What’s the ruling party campaigning on?

Zanu-PF says it wants to attract $5 billion a year in foreign direct investment; last year Zimbabwe secured $289 million, according to the United Nations Conference on Trade and Development. The ruling party is promising to respect property rights and maintain a stable and predictable business environment, though it also intends ensuring that the retail industry is reserved for indigenous people and forcing mineral producers to process part of their output within the country to create jobs. Its other pledges including introducing a favorable tax system, ensuring the judiciary is transparent and independent, and delivering 1.5 million homes over the next five years to address housing shortages.

6. How’s the opposition positioning itself?

The MDC-led alliance has focused on the need to modernize the government, rebuild the country’s crumbling infrastructure, improve the health and education system and increase access to water and electricity. It intends trimming the size of the cabinet, selling off or closing many state companies, introducing a flat corporate tax rate and enacting new laws to encourage foreign investment and make it easier to do business. The MDC says it would compensate white farmers whose land was seized under Mugabe. It plans to scrap so-called bond notes that the government introduced to ease cash shortages, with a longer-term goal of joining a monetary pact with four countries that peg their currencies to South Africa’s rand.

— With assistance by Godfrey Marawanyika, Desmond Kumbuka, and Anne Cronin