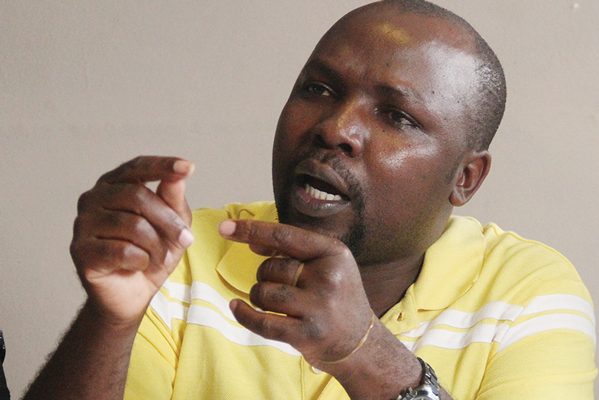 Something is awkward here. How come, whenever people from Zanu PF and their cronies start talking about corruption, many things stop making sense?
Well, they say corruption is to Zanu PF what water is to fish. A clever cliché. But one that makes sense, after all. That could possibly be the reason why, no matter how truthful and accurate these people’s pronouncements against corruption pass, they will always lack the capacity to be sensible.

Just this past week, two chaps from that party put a show and did some puppy yapping that got lots of lazy minds sitting up and yapping in equal measure. The two Zanu PF youth league leaders, Lewis Matutu and Godfrey Tsenengamu called a press conference. Then Tsenengamu called a second press conference, which he addressed without his colleague. They talked about corruption.

At the first conference which, like the second one, was held away from the party, the youth league leaders “named and shamed” a few individuals for being corrupt. Top of the list were Billy Rautenbach and Kuda Tagwirei. Rautenbach is the white guy who knows how to be friends with all the people who matter in Zanu PF, from way, way back. He has business interests just about everywhere, short of your bedroom.

Tagwirei is the black version of Rautenbach. He is the majority stakeholder in Sakunda Holdings, whose signature focus is fuel. But Sakunda does lots of other things, from running national agricultural schemes to dabbling on the foreign currency black market. We were never told what happened afterwards, but Sakunda had its accounts frozen by the Reserve Bank of Zimbabwe (RBZ) last year for suspicious financial business.

Then, recently, it emerged that Tagwirei had bagged the major shareholding in the CBZ bank. Don’t get envious of the chap. Instead, get angry with him. CBZ is now funding the command agriculture scheme, after a huge outcry last year that money was getting taken away straight from treasury to fund Tagwirei’s reported racketeering. Now, if CBZ is funding command agriculture and Sakunda is running the scheme, you know what that says, don’t you? In corporate governance parlance, it’s called acute conflict of interest.

But that’s not the issue for now. Tsenengamu and Matutu seem to be hitting it straight on the head. Just that the press conferences were always going to be a damp squib because they said nothing new. Well, save for the new allegation that Tagwirei now owns all the gold mines in Mashonaland Central. It’s a pity that Zimbabweans tend to celebrate these damp squibs when they come once in a while.

It’s not like the two pressers last week are a new thing. Mid-last year, the youths did a similar thing. They held a press conference at the Zanu PF headquarters, pulled out a long list of heavyweights that they said were corrupt and even gave them a deadline to make amends, otherwise they would never again set foot at the party offices.

Previously in 2018, Acie Lumumba, an ex-Zanu PF youth league leader and protégé of some party bigwigs, pulled a similar stunt. Finance minister Mthuli Ncube, then green on the job, was fooled into hiring Acie into the ministry’s communications department. And before the young dude could sign an employment contract — not that it was ever going to be procedural even if he did — he took to social media platforms and made “startling revelations” about how the RBZ was working with the likes of Queen Bee (aka Tagwirei) to siphon millions of dollars in foreign currency.

Acie became a cartoon hero for a while, because the RBZ even went ahead and suspended senior staff who had been named. But who doesn’t know what happened?

First, those senior executives were called back to work. Then we were told that Acie had actually been planted by one big guy to smear Tagwirei and his handlers because the big guy also wanted to get into the fuel business. After last year’s presser, nothing happened to the youth league leaders. The difference this time around is that they were taken off their jobs in the party and reduced to ordinary card-carrying members. It’s not clear, though, why their boss in the youth league, Pupurai Togarepi, was also punished by being ejected from the politburo.

It was a good thing for Matutu and Tsenengamu to keep the debate on corruption alive. What they said echoes what every ordinary person is saying. But it’s doubtful that was their ultimate intention. The real point is, the latest pressers hardly have anything to do with corruption beyond using the word “corruption” several times in their gibberish. It’s part of the internal politics game that Zanu PF factions are playing.

It’s not clear at what stage Tsenengamu and Matutu rechristened themselves as clean citizens with a genuine concern for the people. But then, it’s not clear if they have even done that. Just last year, they were saying it’s sanctions that are making us miserable, not corruption, and organised mass rallies to drag that futile point home. And do we know how these young chaps rose up the Zanu PF ladder? Do we know what they are currently doing for a living, or what they have been doing for a living? You see, corruption is a celebrated achievement in Zanu PF. On a scale of one to five, almost every person who makes it to the top in Zanu PF is dirty. That gives the probability that, even as they were loudly denouncing corruption, Matutu and Tsenengamu remain as dirty as they come.

There is no problem with that. Sometimes you get this feel-good mood for shooting the postman after receiving your message. Postmen can be bastards. Matutu and Tsenengamu left some important things unsaid. That’s being hypocritical. They singled out the likes of Rautenbach and Tagwirei as though they are operating in a vacuum. For starters, they forgot to mention — evidently out of expedience — that Tagwirei is, in fact, an adviser to President Emmerson Mnangagwa in the Presidential Advisory Committee.

They forgot to mention, again hypocritically, that when Tagwirei was given near-absolute control of the national oil pipeline from Mozambique, it’s not as though he was aiming a bazooka at the president, cabinet, procurement authorities and what not. With such things, it takes dozens to tango. So, instead of sounding as though Tagwirei is alone in this, they must have told the real truth, starting by accusing their very president. But they didn’t.

They forgot, too, to mention that there was no way in which Tagwirei and his Sakunda cohorts could have been repeatedly given the command agriculture contract. This is a scheme that’s supervised straight from the Office of the President and Cabinet.

And their biggest omission, no doubt, was not to mention that, in reality, people like Billy and Tagwirei are, in fact, richly-rewarded runners for the big guys in politics. They are the guys who funded the politicians’ election campaigns and are eating what they sowed. So, when the boys addressed their pressers, they were supposed to start by saying, “This press conference is to express our bitter disappointment with Mnangagwa, his deputies, Cabinet and the rest of the guys in Zanu PF who are responsible for our misery”.