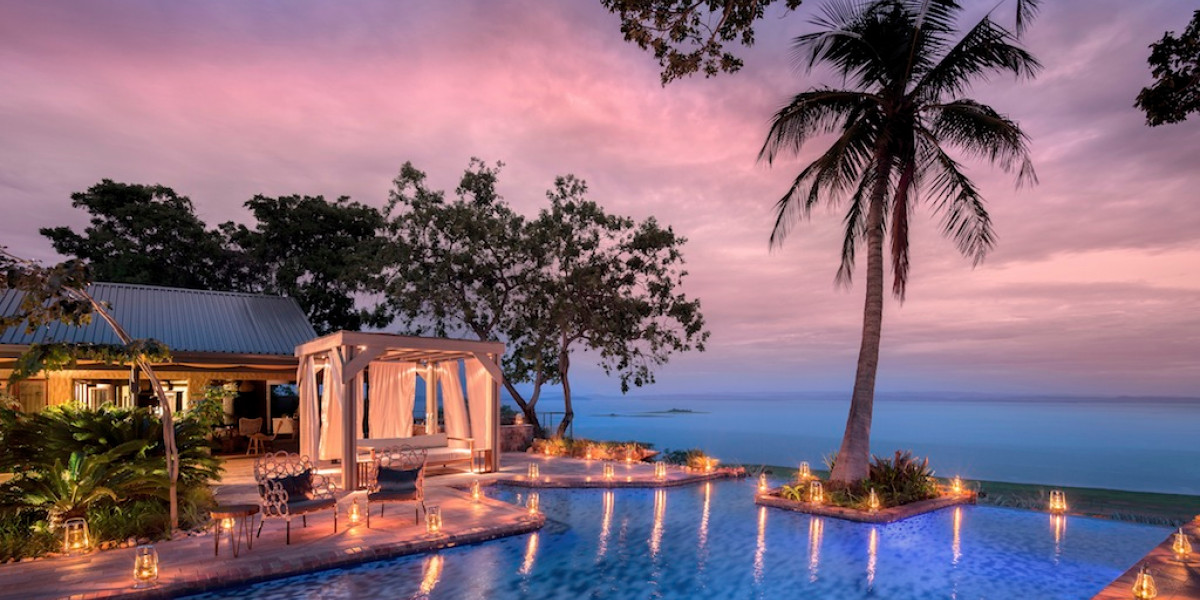 Despite a longstanding reputation for abundant wildlife and spectacular natural beauty, Zimbabwe—bounded by South Africa, Botswana, Zambia, Namibia, and Mozambique, and home to 11 national parks—has seen its appeal as a safari destination dampened by political unrest for decades. But the end of controversial President Robert Mugabe’s 37-year reign two years ago this month heralded a new chapter in the country’s tourism industry. Now the former British colony is re-emerging as a bright light on the continent for foreign visitors, thanks to a spate of new (and newly refreshed) lodges, improving infrastructure, and some of Africa’s best game viewing.

Mavros Safaris, a recently launched safari company from the fifth-generation Zimbabwean family behind celebrated African silverware/jewelry brand Patrick Mavros, is seizing this newfound momentum as the go-to outfit for Zimbabwe’s most exclusive, bespoke safari adventures. Led by Alexander Mavros, Patrick’s eldest son and Mavros Safaris’ cofounder and managing director, the company has tapped its extensive contacts and expert knowledge to offer unrivaled access to the country’s most exclusive private homes and concessions, as well as Africa’s most gifted safari guides.

A Mavros Safaris adventure last September in Zimbabwe’s northernmost reaches showcased the country’s most iconic locales and its profuse bounty of natural riches.

Enchantment by the lake

Spanning some 140 miles along Zimbabwe’s Zambian border, Lake Kariba—the largest man-made lake in the world—commands a distinct majesty, akin to a seemingly infinite sea in this landlocked nation. Fittingly, it’s the stunning setting for Bumi Hills Safari Lodge, the dazzling flagship property of the acclaimed African Bush Camps collection. Perched on a range of hills in one of the country’s most picturesque wilderness locations, the lodge, which accommodates up to 25 people in 10 luxe lake-view suites and a two-bedroom family villa, combines jaw-dropping vistas with a host of activities that underscore the lake’s allure as a world-class leisure and safari destination.

Bumi Hills’ extensive private concession—home to lion, leopard, elephant, and plentiful plains game including impala and kudu—borders Matusadona National Park, allowing wildlife to roam freely between the two areas. Safari drives along Kariba’s shores are an enchanting study in color and light, the sun shimmering on the lake’s hyaline sapphire surface while the electric-green grass at the water’s edge amplifies the graphic beauty of zebra, their manes ruffling in the breeze. Hippos and crocodiles preside menacingly over the shallows, while further away, where the dry season lays bare expanses of earth usually underwater, the ground cover fades to a straw-and-ocher morass just before the tree line, where elephants quietly tread.

Lakeside sundowners conjure their own breed of magic. Our first evening, we drank gin and tonics mixed by our endlessly knowledgeable guide, Steve Chinhoi, beside a sprawling group of buffalo, as the sun fell below the horizon in a flurry of fuchsia and lavender. Sunrise breakfast is equally enthralling: Arriving early the next morning at a crescent-shaped shoreline studded with scads of mopane tree skeletons—a conspicuous Lake Kariba feature—we found a mobile bush kitchen manned by the smiling staff. Laden with plates of omelets and freshly baked muffins, we feasted to the sound of birdcalls as sunlight danced a brilliant orange on the water that lapped at our feet.

While guests are spoiled for choice of things to do (lake cruises and fishing among them), the lodge is also a prime place to unwind. An idyllic infinity pool takes center stage, surrounded by common areas masterfully decorated with clean-lined contemporary pieces and handmade African accents, including the striking stone Shona sculptures for which Zimbabwe is world renowned. After elegant three-course meals on the candlelit terrace, the boma (gathering place) on the bottom deck is perfect for ruminating on your good fortune beside the crackling fire, Amarula (a cream liqueur from South Africa) in hand, beneath the starry canopy of the unmistakable African sky.

With seven tents and a maximum capacity of 12 guests, Goliath Camp—Stretch’s home base, perched on an especially scenic bank of the Zambezi in the park’s north—melds creature comforts (hot outdoor showers, scrumptious three-course dinners) with a bona fide, into-the-bush safari experience. Guests are advised to look both ways when leaving their tents after nightfall to avoid perilous run-ins with four-legged locals that often meander through—like Bruce, the camp’s resident hippo, who splashes in the river by day, trundles noisily between tents by night, and occasionally snoozes beside the bar in the wee hours. While a few house rules may seem a bit draconian (it’s literally lights out at 9 p.m., when the generator cuts off), they’re all in the interest of optimal safari sojourns, which kick off well before sunrise when guests pile into the jeeps to Stretch’s familiar refrain: “Okay, guys, let’s get serious!”

Unlike most safaris, where the goal when on foot is to evade anything that could trample or eat you, Stretch specializes in such extraordinary encounters. His unmatched expertise and deep familiarity with many of Mana’s 12,000-plus elephants—his names for them include Fred Astaire (for his knack for standing on his hind legs to grab high-hanging snacks) and Donald Trump (for his truculent nature)—serve as insurance policies against potential headline-making scenarios.

One morning, we pulled up to a herd in a sun-dappled clearing shaded by apple-ring acacias, whose seed pods help elephants survive during the long dry season. (Zimbabwe is presently suffering its worst drought since 1992, and Mana Pools has been one of the areas hardest hit; in the past two months, well over 100 of the country’s elephants have died as a result.) We were perusing the peaceful scene when Stretch grasped my arm firmly and began marching me in the direction of a grazing bull with magnificent tusks, ignoring my repeated pleas of, “No, I’m good—I’ll just stay here, thanks!”

When we were even with the elephant, still a healthy distance to our right, we turned sharply and proceeded slowly toward him; Stretch quietly told me to sit down at the base of the tree under which stood our new friend, some 15 feet away. The bull advanced warily, training one long-lashed eye on us as I held my breath, then returned to scooping up seedpods with his trunk. “See, we’ve just established our territory, and he respects that,” Stretch whispered before striding back to the group, leaving me in silence and awe.

Encompassing nearly 6,000 square miles in the country’s northwest, Hwange National Park, Zimbabwe’s largest natural reserve, boasts a profusion of wildlife—including some 50,000 elephants and one of Africa’s largest wild dog populations—and highly varied terrain ranging from desert dunes to mopane woodlands. Having opened last May, Deteema Springs Camp, one of the latest additions to the Machaba Safaris portfolio, offers both a new gateway to the park’s relatively unexplored northern region and a level of hospitality on par with Africa’s very best safari camps.

Deteema’s awe-inspiring setting verges on the indescribable: Its eight en-suite tents overlook an IMAX-like panorama of the surrounding wilderness, frequented by elephant, lion, and a slew of other wildlife. Elephants loom especially large here. For sundowners our first evening, we were spirited a five-minute drive away to the neighboring Deteema Dam, where, as if cued by the descending dusk, some 30 pachyderms paraded down the far hill to drink at the water’s edge in the pink-hued twilight.

We began one day with a walking safari led by Sam Mushandu, considered one of Zimbabwe’s most talented guides. Setting off across the hills under a cloudless sky, we glimpsed giraffe—often called “Africa’s constant gardeners”—nibbling daintily on acacia trees, and listened as baboons shrieked in the distance to warn others of nearby lion, whose fierce, reverberating roar had awoken us before dawn. That afternoon, we drove some three hours through the park to Deka Camp, Deteema’s sister property and likely Hwange’s remotest lodge. En route we saw kudu crowned with their telltale spiral horns, rare roan antelope, and a dazzle of zebra darting through the parched grass in a dizzying, black-and-white blur—but nary another jeep, which speaks to the truly uncharted nature of northern Hwange.

Back at camp, Deteema’s charming, gregarious staff make cocktails and dinner in the beautifully outfitted common tent an especially festive affair. Dining on creamy cauliflower soup and perfectly grilled beef washed down with South African Pinotage wine while listening to a team member’s tale of being chased along Deteema’s wooden walkways by an ornery honey badger was an ideal end to a day of discovery.

Luxury on the Zambezi

No visit to Zimbabwe is complete without a visit to Victoria Falls—called “The Smoke That Thunders” in the local Tonga language—the largest waterfall in the world, and one of its seven natural wonders. Twenty-five miles upriver, nestled on a verdant stretch of the Zambezi, lies Matetsi Victoria Falls, one of Africa’s most lauded lodges. An über-luxe base from which to explore the Falls, Matetsi also offers outstanding safari experiences on its private, 200-plus-mile game reserve, a unique value proposition that puts the resort in a class by itself.

Comprising two artfully designed camps, each with eight suites and one family suite, as well as a four-bedroom private villa with its own staff, Matetsi pampers guests in peerless style. Rooms feature resplendent king-size beds, indoor and outdoor rain showers, and plunge pools overlooking the river, while Zimbabwean art throughout the property highlights the lodge’s emphasis on celebrating local talent.

Service by Matetsi’s ever-smiling team is also world-class and emblematic of the defining warmth of the Zimbabwean people. Upon arrival, I asked to have a dress pressed for that evening, which magically reappeared at my door, still warm from the iron, some 40 minutes later. After a morning walking safari in the considerable heat, I returned to my room to find a bubble bath awaiting me in the oversize soaking tub, along with a handwritten note from my housekeeper.

The lodge’s cuisine, overseen by executive chef Shane Ellis, is arguably some of Africa’s finest, with a focus on fresh fish from the river and other locally sourced fare. Ellis’s prodigious talents were on full display during a pop-up boma dinner deep in the bush, where we dined on exquisite dishes like spicy coconut poached prawns and kudu fillet with beetroot chutney—prepared on-site by Ellis and his headlamp-wearing team—beneath lantern chandeliers hung from the trees.

Game drives through Matetsi’s lush and diverse landscape—studded with African sausage and acacia trees, blanketed by sweeping golden savannahs—showcase the most resonant element of the “Matetsi magic.” Once nearly decimated by poaching and illegal hunting, the reserve now teems with buffalo, elephant, giraffe, wildebeest, kudu, and zebra, as well as several lion prides, thanks to the considerable conservation measures undertaken by Zimbabwean businessman John Gardiner, who purchased the property five years ago, and his family. They promptly reestablished a vast road network vital to anti-poaching efforts and drilled 16 solar-powered boreholes to bring precious water to the reserve. These and other ongoing initiatives have helped restore the concession to a thriving, pristine wilderness—a vivid snapshot of both Zimbabwe’s exceptional gifts and its boundless potential.