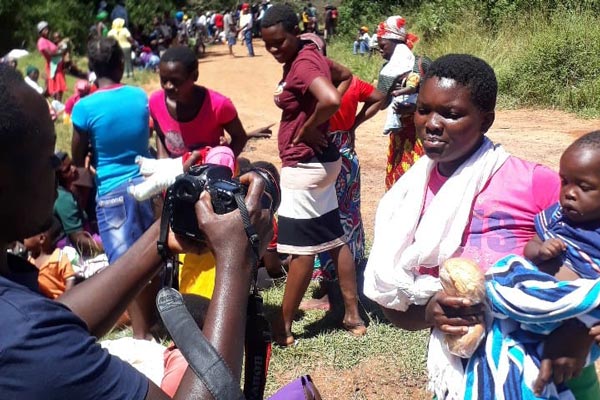 THERE are fears that relief aid meant for cyclone victims is being “looted” after eight branded Zanu PF vehicles yesterday drove off with foodstuffs from Silver Stream distribution centre in Chimanimani as some villagers are now resorting to cooking raw bananas to starve off hunger.

For the better part of yesterday afternoon, Zanu PF councillors took command of the food distribution centre, making sure that their wards were allocated foodstuffs.

Priscilla Chideme, a civil servant and head of logistics for Silver Stream, yesterday refused to comment on the Zanu PF-branded trucks that drove off with relief food.

“I can’t comment on that. They [Zanu PF officials] came and dealt with the colonel. I am a civil servant, I need clearance to talk to the media. I am sorry I cannot answer on that,” she said.

But Chideme said the delays in food distribution were due to the impassable roads and that they were relying on South African helicopters to reach inaccessible areas.

But Major Benedict Sibanda, responsible for the soldiers deployed at Silver Stream, said he would not give much information, asking NewsDay to seek comment from the Manicaland provincial command centre in Mutare.

“This one is a logistical base, relief is coming from the taskforce in Mutare. The roads are not yet accessible to needy areas,” Sibanda said.

But NewsDay saw a fleet of Zanu PF branded vehicles coming out of Silver Stream and some irate villagers disclosed that the trucks, from some provinces outside Manicaland, drove off with the food.

“Eight (trucks) came here, (were) loaded with relief aid and drove off,” one villager said.

“People grumbled, but had no one to tell. The councillors are directing food distribution. It is now a Zanu PF thing.”

NewsDay witnessed some youths in Zanu PF regalia directing the loading of food onto a military truck to be distributed to Tandavell in ward 15, with ward councillor Tendai Nyabangu running up and down to ensure that a truck was dispatched to people in her ward.

Some of them said they had travelled about 25km from Mary Waters after the Zanu PF ward structures told them to go and queue for food aid.

Nyabangu denied food was being distributed along political party lines, claiming the Zanu PF trucks could have taken away food aid before she arrived.

“I came late. That could have happened before I came. Everything is above board. Everyone who deserves food aid will get it,” she said.

“Why don’t you check with Madiro? He is closer to what is happening,” he said.

But at Tandavell, Zanu PF officials were addressing villagers, chanting slogans and assuring them that food aid would come because the councillor had promised.

Later in the day, irate villagers were complaining over delays in the allocation of the food aid, claiming they would have challenges in travelling back to their villages.

“Since the disaster came, we have not received any aid. We are now surviving on cooking raw bananas. We call them sodoma because it killed some community members in 2007. We boil, peel them and eat. We don’t have food. We lost everything, including our livestock,” one woman shouted.

“We have been here since morning. Zanu PF ward officials told us to come here to receive food and we were here since morning. This is now 4pm, we did not receive anything. We are starving. How are we going to walk for 25km back home to Mary Waters?”

At Cathrine Dairies in ward 6B, many villagers returned home without relief aid saying the food distribution was done along partisan lines and spearheaded by the councillors and headmen.

“They give who they want to give. A lot of underserving people were getting the aid, while the people who have a real need are turned away,” one furious female villager said.

“The same way they had been distributing fertilizers. They have a list of the people they want to give. Our names were not even on the list.”

Another villager, Stephen Machiridza, who was given a 10kg pack of mealie meal, said he had to seek the help of a soldier to get something after his name was not included on the list of beneficiaries.

“Some of the people who got the aid are underserving. I sleep under an avocado tree. My wife has taken our children to her relatives. A neighbour prepares the food for her family, yet here they give me only 10kg mealie meal,” Machiridza said.

Another villager, Simbarashe Simango, said he had to besiege the councillor’s home to get “three cups of beans and 18 potatoes after I was turned away when the food was being distributed”.

“My house was destroyed. I don’t have blankets. The people getting aid are those who were least affected,” Simango said.

But others who received the relief packages at Cathrine Dairies claimed the distribution of food was fair.

“The headman and councillors took down the names of people affected and those were the people who got aid. It was fair,” one woman said after receiving mealie meal, kapenta, porridge, blankets and cooking oil.

Some government health workers stationed at Skyline, who declined to be named, said the problem was that because of drought, all people, even those who were not affected, were now coming for food allocations.

“This place [near Skyline] was not affected as much as Ngangu and Kopa, but all the people want to receive aid. Those people claiming they are being denied food aid are not deserving beneficiaries,” the health worker said.

Local Government minister July Moyo, however, said they had introduced an efficient and strict way of co-ordinating the humanitarian aid by establishing two centres at World Vision warehouses in Mutare and Harare.

“There are security systems monitoring the aid. At each warehouse, we make sure there is also an official from the Ministry of Social Welfare. All other agencies are there. We have a centre for receiving and another one for dispatching the aid,” he said.