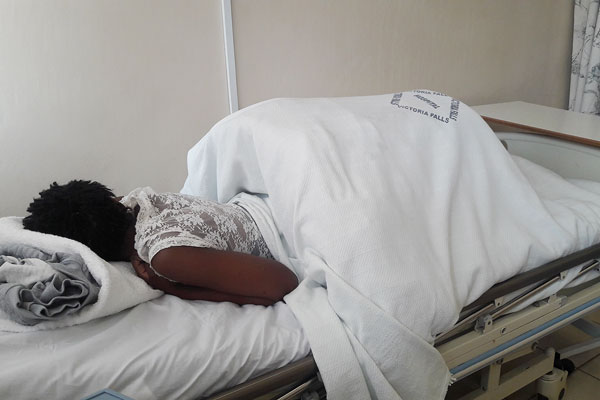 A VICTORIA Falls woman, Philile Dube, has filed a notice to sue Police Commissioner-General Augustine Chihuri for damages she sustained after she was allegedly made to sit in a caustic soda-contaminated police vehicle following her arrest.

Zibusiso Moyo lies in a hospital bed in Victoria Falls;

Dube and her alleged accomplice, Zibusiso Moyo, are nursing burns to their hands, backside and private parts after they were forced to sit in the load box of a caustic soda-contaminated vehicle following their arrest on allegations of loitering for purposes of prostitution.

Dube, through human rights lawyer, Thulani Nkala, is now suing Chihuri and the Home Affairs ministry for injuries sustained during her detention and arrest.

In a notice, the lawyer said his client is demanding damages for “unlawful detention, and arrest and negligently causing her injury in terms of section 6 of the State Liabilities Act (Chapter 8:14).

“The unlawful detention continued for more than four hours despite her resistance. As a result, and in addition to non-physical injuries, ours suffered burns on both hands.

“It is against this background that we are instructed to notify your reputable office that ours shall be instituting a civil claim against yourselves and all relevant parties for damages resulting from the conduct of the police officers,” Nkala said in a letter addressed to Chihuri.

“After the unlawful arrest, she was detained inside a police van; the vehicle floor had salt-like substances, which turned to be hazardous.

“While in the vehicle, she complained of burns on her buttocks, but four police officers ordered and forced her to sit on the vehicle floor and retorted that it is salt, and no one was ever hurt or burnt by salt, while a female officer hurled insults at her,” Nkala said.

Last week, Victoria Falls district Chief Superintendent Jairos Chiwona was quoted in the media saying the police were not responsible for the injuries suffered by the two women.
Moyo is still admitted at Victoria Falls District Hospital since June 27 and her wounds are not showing anysigns of mending.

Meanwhile, Moyo has secured financial assistance for her treatment at a private medical institution.

She will be admitted to Galen House Emergency Medical Clinic in Bulawayo.

“We heard about the issue and we immediately visited her. Her injuries touched everyone and, hence, a move to assist her,” he said.

“We are working with Counselling Services Unit that will fund her medical bills, while offering counselling to her and, on our side, the human rights department will take care of legal costs because she was injured in the hands of police and justice has to prevail.”

Moyo expressed gratitude for the assistance.

“I am grateful for this because I had lost hope. I am happy that people are standing with me and willing to help me,” she said.

Moyo, a mother of one, miscarried due to the torture.