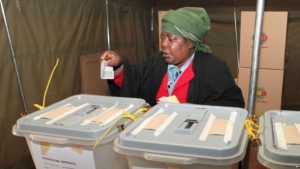 FILE – A woman casts her vote in presidential and parliamentary elections in Zimbabwe’s capital, Harare, July, 31, 2013. Four women are among the presidential candidates seeking election on Monday.

A trade unionist, a liberation war icon, an author and a fashion designer are running for the presidency of Zimbabwe. Regardless of whether any of them is elected, they’re already making history as the first female candidates for the country’s highest office.

They’re among a record-breaking 22 contenders in Monday’s presidential election, the most since the southern African nation gained independence from Britain in 1980. (A 23rd had dropped out of the race.) It’s also the first contest without former strongman Robert Mugabe on the ballot; the army dislodged him last November.

The presidential election is widely considered a toss-up between incumbent Emmerson Mnangangwa, 75, of the ruling Zanu-PF party, and Nelson Chamisa, 40, a lawyer who leads the Movement for Democratic Change Alliance.

The two others are lesser known: Melbah Dzapasi of #1980 Freedom Movement Zimbabwe and Violet Mariyacha of the United Democratic Movement.

But these and other female candidates in Zimbabwe face challenges beyond those of their male counterparts.

Nationwide, “the level of misogyny … is very sickening,” she continued in an interview earlier this week with VOA’s Zimbabwe Service. Her party’s candidate, Khupe, has endured social media insults calling her a prostitute, among other things.

A report released this week by the International Foundation for Electoral Systems, a U.S.-based nonprofit that provides technical assistance and guidance for democracies, found that “deep-seated inequality and targeted violence against women in elections (VAWIE) inhibit Zimbabwean women from taking full and equal part in this transformative moment.”

IFES found that Zimbabwe female candidates, voters and journalists “experience devastating sexual extortion, physical and sexual violence, harassment and intimidation from their bosses, colleagues, religious leaders and domestic partners in relation to the exercise of their political and civil rights.”

Females represent just over half of Zimbabwe’s 16.7 million residents, and 54 percent of its nearly 5.7 million voters.

With that kind of voting representation, candidate Khupe has reasoned, “not only do they deserve a seat at the table but [women] also deserve to head that table.”

Zimbabwe’s Parliament has 182 men and 88 women. The country’s 2013 constitution holds 60 seats for women, in a quota provision that runs out in 2023. Earlier this month, the Open Democracy website noted that women are underrepresented among parliamentary candidates for the ruling and main opposition parties, so their numbers are likely to decline – even though the Zimbabwe Women Parliamentary Caucus and various women’s organizations had crafted an election manifesto calling for gender parity.

In late June, Zimbabwe’s Women in Politics Support Unit released data showing that women are underrepresented among candidates for local office, too.

Female candidates for a five-year term as president include:

Joice Mujuru, the former vice president, was considered a potential successor to Mugabe before she was expelled from office for allegedly plotting to assassinate him. She has denied the charges.

During the protracted liberation war against Rhodesian forces, Mujuru had become one of the first women commanders in the Zimbabwe National Liberation Army.

“I have heard some people saying Zimbabwe is not yet ready for a female president,” she said in an address last month to supporters. “When we went to war, women were never given guns that were written ‘women only.’ We were all given the same weapons with men, so I am ready to liberate every one of us, including those in Zanu-PF who are oppressed.”

Thokozani Khupe, a veteran trade unionist, was the first female vice president of MDC-T, led by Prime Minister Morgan Tsvangirai. After Tsvangirai died of cancer in February, Khupe and Chamisa had a falling out, splitting the party in two. She had served in Parliament since 2000, representing the Makokoba suburb of Zimbabwe’s second-largest city, Bulawayo.

Violet Mariyacha: The United Democratic Movement candidate is a businesswoman, creating jobs for office workers and cleaners. She’s also a novelist (“Jocelyn’s Phantom Husband”) and singer-songwriter. One song is titled “Taneta,” translating to “we are tired or fed up.” She said she aims to “inspire and motivate political activists in Zimbabwe.”

Melbah Dzapasi: The 44-year-old fashion designer and entrepreneur leads the #1980 Freedom Movement Zimbabwe. She supports a nationalistic policy that would give Zimbabweans control of agriculture, infrastructure and mining sectors.

She told the state-leaning Sunday Mailnewspaper that her party’s priority is to wage a “new economic war to liberate indigenous Zimbabweans from decades of economic exploitation.”