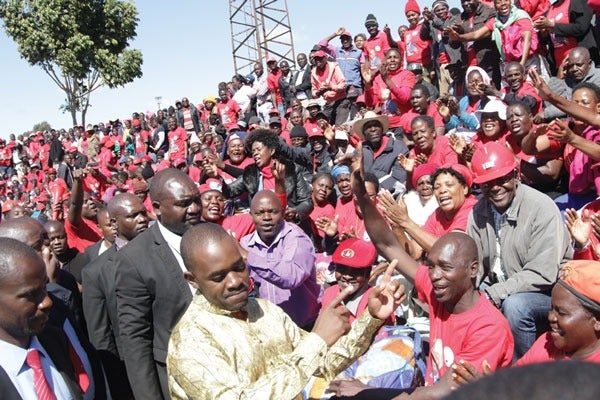 The opposition MDC has alleged that warring machete-wielding artisanal miners in Mashonaland Central province are under Zanu PF control.

“We know that illegal miners who are causing terror in this province are under Zanu PF control,” he charged.

“They visited the homes of artisanal miners at Mazowe and Eureka, what for? Yet we all know that Zanu PF leaders are behind the machete-wielding gold panners?”
Mazowe Mine popularly known as Jumbo is now the hub for illegal miners amid reports that Zanu PF bigwigs were sponsoring their activities.

“It is now pay back time for President Emmerson Mnangagwa’s regime after removing former President Robert Mugabe. Surely, how can the police and the army fail to control artisanal miners who use machetes and concentrate on unarmed protesters,?” he asked.

“The reason is that some Zanu PF officials are sponsoring the illegal miners.”

He claimed that some Cabinet ministers, particularly from Midlands province were godfathers of the artisanal miners.

But Kazembe, who is Zanu PF the Mashonaland Central provincial chairperson said his party does not condone abuse of authority.

Kazembe recently led a stakeholders meeting in Glendale and Bindura after Zanu PF youths attacked panners popularly known as MaShurugwi resulting in the burning of two commuter omnibuses and damage of houses.

“If such cases are taking place, we ask those with information or evidence to report to the police. We also need to be wary of criminals who abuse names of senior party officials to instil fear in their victims,” he said.

Some of the artisanal miners who spoke to NewsDay, however, commended Mnangagwa for allowing them to mine, unlike his predecessor the late Mugabe who arrested them.

Meanwhile, war veterans in Guruve have been accused of using their district party vehicle to harass mine owners and demanding gold ore and money. Two suspected State operatives were also seen mobilising illegal miners who invaded Ashly Makara’s gold mine in Kachuta two months ago resulting in divisions reportedly arising between operatives in the President’s Office and the police in Guruve district.

Rogue police officers are also accused of illegally mining and accepting bribes to allow artisanal miners to mine in both Mazowe and Eureka.

Eleven police officers who were guarding Mazowe Mine were last month arrested on charges of murdering an artisanal miner after receiving US$120 in “protection fees” from the panners.