Source: Zanu PF buses supporters to get IDs at night | The Mirror 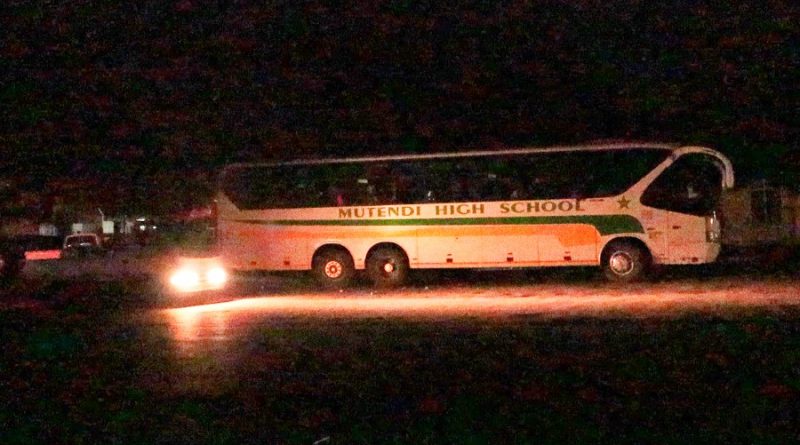 MASVINGO – It’s midnight and a Mutendi High School bus is curiously parked outside the registry office in Masvingo. Mirror reporters are tipped of the goings-on; Government business in the darkness of the night! From 8pm, the reporters monitor the parked bus from a few meters, as passengers some in party regalia move in and out and proceed to the registry office. A Central Intelligence Officer (CIO) vehicle is parked behind the bus and the officer closely monitors the situation in-between trips to and from his office. Masvingo District Development Co-ordinator (DDC), Ray Hove arrives in his Silver Toyota Fortuner and briefly chats to the man from the President’s Office and drives off. Mirror chief cameraman eventually sneaks in and joins the process.

It emerges that the school bus is on a political mission. The passengers are actually Zanu PF supporters brought in from Masvingo North, a constituency run by Bishop Mutendi’s son-in-law Davis Marapira who is also a Minister in the President’s office. The Mirror cameramen observes as the passengers, young and old are shuffled from one office to another as they start by getting pictures taken and then proceed to the birth certificates and IDs. The passengers are getting instant birth-certificates, then IDs and they are added onto the 2023 voters’ role. It’s a business class treatment for a process that currently takes up to a year for one to complete. All is done in a matter of hours.

Getting an ID has been a difficult process over the last three years. New applicants are being told to leave their names at the registry offices and come after three months, when they come at that time they are given yet another three months and the postponements go on and on. In rural areas mobile registration units process a few IDs a day and thereafter give excuses like the camera is not working or there is no network to complete the process.

A Mirror reporter today went to the same office where IDs were being issued last night and told that there is no network. Sources in Zanu PF said the clandestine issuance of IDs and registration of voters is just a tip of the iceberg. In Gutu Senator Lovemore Matuke and his MPs including Winston Chitando and Yeukai Simbanegavi are doing it on a grand scale. Asked for a comment, Citizens Coalition for Change (CCC) vice president, Tendai Biti said there was nothing wrong with political parties encouraging their supporters to register to vote or get national documents but bringing in Government workers to do the work at night and in secrecy constitutes an illegality. He said that CCC is ready to take those involved to court. – Masvingo Mirror