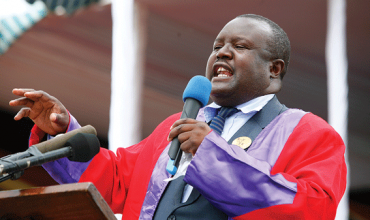 Zimbabwe Council of Chiefs president Fortune Charumbira’s shameful speech at the just-ended Zanu PF annual conference was the latest showcase of the ruling party’s disdain for the rule of law.

Charumbira, who has in the past been censured by the courts for his illegal political activities, gave a solidarity message at the conference that was held in Bindura where he vowed that traditional leaders “will never leave Zanu PF”.

Zimbabwe’s constitution in clear terms bars traditional leaders such as chiefs from dabbling in politics.

It says traditional leaders “must not be members of any political party or in any way participate in partisan politics”.

Traditional leaders are also barred from furthering the “interests of any political party or cause”.

Charumbira is particularly aware of these constitutional imperatives because in 2018, High Court judge Justice Clement Phiri ordered him to retract remarks he made at a Council of Chiefs conference the same year where he said traditional leaders must continue to support Zanu PF and its leader President Emmerson Mnangagwa.

The judge declared that the remarks were in contravention of Zimbabwe’s constitution.

He ordered Charumbira to “retract in writing the statements that he made to the effect that traditional leaders should support and vote for Zanu PF”.

The former deputy minister is yet to comply with the court order and the message he is sending is that he is above the law.

On Friday, he used a bigger stage — the Zanu PF conference — to send a message to the courts that he is untouchable.

That he made the statement in front of Mnangagwa and other government leaders speaks volumes about the authorities’ attitude towards the rule of law.

Charumbira was cheered on by Zanu PF because the party has mastered the art of using a patronage system that reduces traditional leaders to political commissars of the ruling party during election time.

The abuse of chiefs for political gain is a strategy that was perfected by colonial governments and it is a pity that a party of liberation such as Zanu PF continues to perpetuate the illegality.

If Zanu PF still wants to be taken seriously as a ruling party that respects the rule of law, it must distance itself from Charumbira’s clearly unconstitutional remarks.

If Charumbira himself does not see the folly of his ways and retract the statements, he must be forced to learn the hard way through another robust court action.