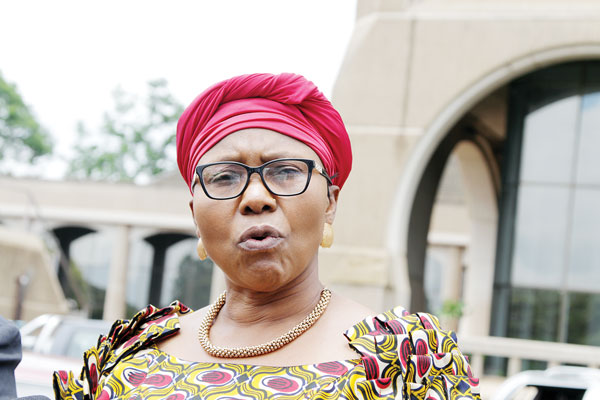 In a leaked audio, Maybe Mbowa, the ruling party women’s league national commissar and Gokwe-Nembudziya senator is heard claiming that a group of soldiers were on a rampage in the district, harassing shoppers and forcing villagers to crawl in water, exposing them to COVID-19.

Mbowa was not picking calls yesterday, but in the audio discussion with someone she addressed as a senior member of the security sector in the district, she claimed to have received several reports of soldiers harassing villagers.

“That one is being done by Nyathi. You can get hold of Nyathi,” he said.

Nyathi said they were investigating the claims.

“So far, we haven’t received any report from Midlands, you can check with us tomorrow (today), we are investigating the claims,” he said.

In the audio, Mbowa is heard saying: “As Senator and political commissar of the women’s league, I am not happy with the reports.

“I can phone straight to the President because I suspect there is something happening behind the scenes. I don’t know what it is, but I am even ready to engage their (soldiers’) leader here. You can invite me to your meetings and I talk to them.”

She added: “I got several reports and I initially ignored them thinking people were lying. The recent report was about a former teacher who was harassed and was beaten by the soldiers while forcing him to crawl. Another victim was forced into the water. Imagine in these COVID-19 times, someone is forced into the water exposing them to the virus.

She said the military should be friendly to the people and should not instil fear.

“Where in town have you seen people running away from soldiers? Why is it it’s only Nembudziya that is experiencing that?

“I don’t want to cause problems for security people because I can call (Midlands Provincial Affairs minister Larry) Mavima, I can call our party chairperson and Defence minister (Oppah) Muchinguri to say, are the soldiers working for government or they are working against the government?”

She said she had no problem with soldiers dealing with commuter omnibus operators violating COVID-19 rules and regulations, but was concerned about the harassment of ordinary citizens.

“We agree when they deal with errant kombi operators, but what pains me is that after doing all that and allegedly extorting money, they then force open a bar and drink beer in the eyes of the public. Honestly, can that be okay?”

“We have a police force and the police force should be the one on the forefront of enforcing the regulations and when they are overwhelmed, that’s where the government said soldiers should come in to help and not for soldiers to be in the front.”

She said reports of soldiers harassing people were on the rise, adding that there was need for action or else she would engage Mnangagwa.

There were reports of soldiers harassing citizens in Mberengwa following a break-in at the home of Local Government minister July Moyo.