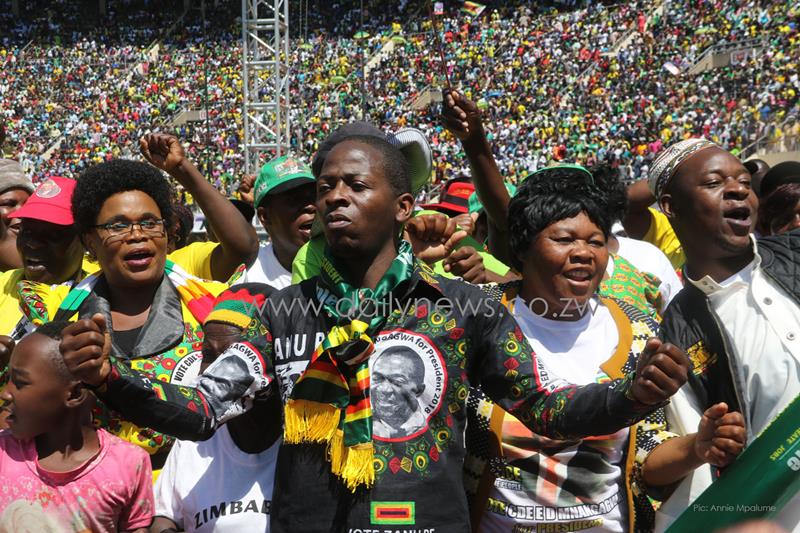 HARARE – President Emmerson Mnangagwa has ordered Zanu PF bigwigs who are
employed at the party headquarters to wear party regalia when on official
duty.

He told the Zanu PF central committee meeting on Thursday that it was
disconcerting to note that former Cabinet ministers and other ruling party
bigwigs who were given full time jobs at the party headquarters were not
wearing Zanu PF regalia as the party’s brand ambassadors.

To stress his point, he requested former Cabinet ministers Simon Khaya
Moyo; Patrick Chinamasa; Obert Mpofu; Chris Mushowe; Edna Madzongwe; Paul
Mangwana; Simbarashe Mumbengegwi; Mike Bimha; David Parirenyatwa; and
Josiah Hungwe, together with other Zanu PF bigwigs that include Douglas
Mahiya, Lewis Matutu and Cleveria Chizema to stand up so that other
central committee members could see for themselves what he was talking
about.

Zanu PF regalia, more often than not, displays the face of the incumbent
first secretary of the party who is Mnangagwa.

When he first ascended to power after taking over from deposed leader
Robert Mugabe in November last year, Mnangagwa insisted that he did not
believe in party symbols after realising that his supporters were taking
apple-polishing to dizzy heights.

He even restrained party supporters from singing songs that idolise him.

“The praise song I desire, if you were to sing one, is that of our
National Anthem and those from the liberation struggle, not for me, no,”
Mnangagwa said then.
Months on, that refreshing new order seems to be turning into a mirage.

Mnangagwa’s veneration is being amplified through Jah Prayzah’s hit songs
– Mudhara Achauya and Kutonga Kwaro – which upon their release stoked
political controversy but have become almost national anthems at Zanu PF
functions.

As if to endorse the adulation, Mnangagwa dances to the tunes at every
party event and sometimes at government functions.

Another hit song, ED Pfee, has also joined the fray while party regalia
emblazoned with Mnangagwa’s name have since been acquired including caps
with the ED Pfee label.

While war veterans who were Mnangagwa’s foot-soldiers in the battle to
succeed Mugabe regretted the fact that they had made a cult of Mugabe, the
same is being perpetuated in the new president’s name. Former Psychomotor
minister Josiah Hungwe set the trend when he described Mnangagwa as “a son
of man” well before he became president.

Mpofu, who as former Home Affairs minister famously used to sign off his
communications with Mugabe by saying “your most obedient son”, has
previous likened Mnangagwa to the biblical Joshua who is “as soft, as
tender as an African mother’s love” notwithstanding his nickname – Ngwena.

Zanu PF Harare provincial chairperson Goodwills Masimirembwa has also
taken his bootlicking to another level when he gave welcome remarks to the
party’s extraordinary congress in December last year.