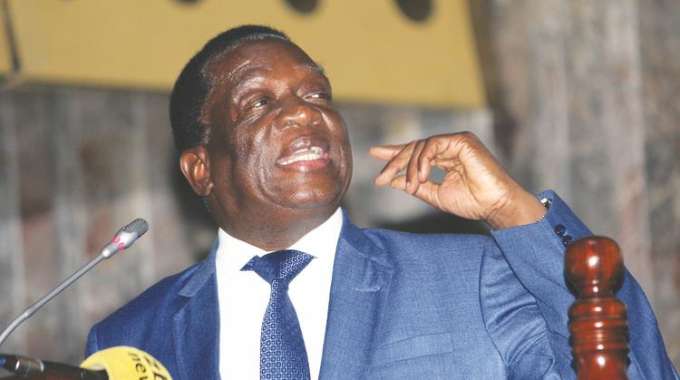 Felex Share Senior Reporter
President Mnangagwa yesterday said Zanu-PF will take over the more than $350 000 debt owed to service providers by the party’s Youth League to enable the wing to function without hindrances. The previous Youth League, which was controlled by the G40 cabal left a $350 000 debt to service providers amid reports that former executive members were using the wing as a conduit to loot funds.

No meaningful youth development programmes were recorded on the ground.
Addressing the Zanu-PF national youth assembly on Wednesday, President Mnangagwa said the youths needed to be well-resourced.

“I am informed that the previous executive left a huge debt with service providers,” he said.
“The party through the secretaries for administration and finance will look into the matter for conclusive resolution. We are taking over that debt and you can move forward without it.”
He added: “I have been informed that the Youth League is faced with a myriad of challenges. I would like to assure you that the party will ensure that you are appropriately resourced to enable you to effectively deliver on your mandate.”

The Central Committee report presented to the Zanu-PF Extraordinary Congress last December revealed that the previous executive members operated in secrecy and plundered the organ’s resources.
President Mnangagwa said the Youth League would benefit from the vehicles the party had ordered.

“What I know is that we have ordered a big number of vehicles,” he said.
“Some we will allocate to the main body, some to the Women’s League and some to the Youth League. Only when they come shall we discuss how to distribute. We don’t distribute before they come.”

He said the Ministry of Women and Youth Affairs was working on youth empowerment funding schemes which would be availed soon.
“Youths, however, must be encouraged to pay back when loans are advanced to them,” he said.

“In addition, Government will soon introduce an organised housing scheme to benefit the youths and marginalised communities. You have also told me that you are not happy being in the Ministry of Women Affairs. I have taken note of that.”