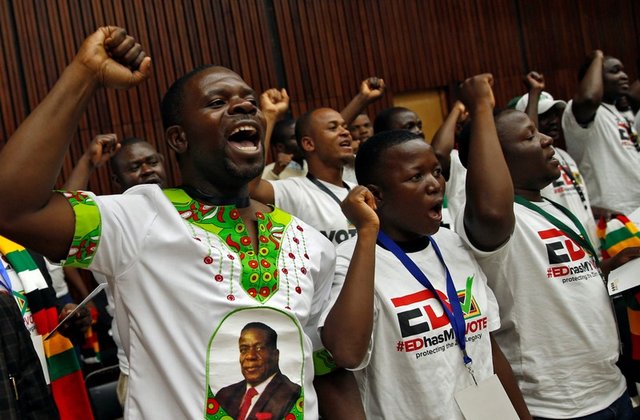 HARARE (REUTERS) – Robert Mugabe’s fall from favor in Zimbabwe appeared complete on Wednesday when youths from his former party, the ruling ZANU-PF, chanted slogans denouncing him, in an unthinkable prospect before the November de facto coup that ended his near four-decade rule.

In public, new President Emmerson Mnangagwa has continued to refer to 94-year-old Mugabe as an “icon” for leading Zimbabwe’s independence war, but news this week that Mugabe is backing a new political party has soured relations between him and his ex-comrades.

At a meeting with Mnangagwa at the ruling party headquarters in Harare, ZANU-PF youths took turns to denounce Mugabe while hailing the leadership of Mnangagwa, who sat smiling, flanked by senior party officials.

The youths chanted “Down with Robert Mugabe,” a slogan the former ruler had used himself in irony against rivals since the country won independence from Britain in 1980.

Young party members and party officials have so far refrained from condemning Mugabe, instead denouncing his allies.

But the signs of his fall from favor across society are growing. The state-owned Herald newspaper, which had previously referred to Mugabe as “Comrade” after his resignation, on Wednesday began refer to him as “Mr”, a title usually reserved for opposition rivals.

The New Patriotic Front, a new party headed by former army general and Mugabe loyalist Ambrose Mutinhiri, said it has Mugabe’s support and will challenge Mnangagwa at polls expected in a few months.

Mnangagwa told the youths gathered at the party headquarters that ZANU-PF was set for a landslide victory in the presidential, parliamentary and council elections due by Aug 21.

Since his fall from power, Mugabe has stayed at his Harare mansion with his wife Grace, but on Wednesday he left to visit South Africa for unknown reasons.