Zanu PF to use Tsvangirai’s funeral to lure voters: Madiro 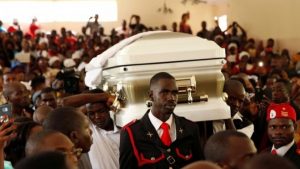 Madiro told the meeting that Zanu PF supporters should attend Tsvangirai’s burial, which is set for tomorrow.

He urged Zanu PF party supporters to be vigilant claiming that he fears violence against MDC-T supporters at the burial claiming that when they attended the late Tsvangirai’s wife Susan burial some Zanu PF supporters were assaulted.

“Our President Emmerson Mnangagwa will attend Tsvangirai’s burial. Let’s use the bereavement to add value to our party,” he said.

Tsvangirai succumbed to colon cancer last week in South Africa, where he was receiving treatment.

Muchinguri weighed in saying the MDC-T was a force to be reckoned with.

“Don’t take the issue of opposition party lightly, yes, there are divisions, but it’s good to be prepared and it’s critical to be prepared every time,” she said.