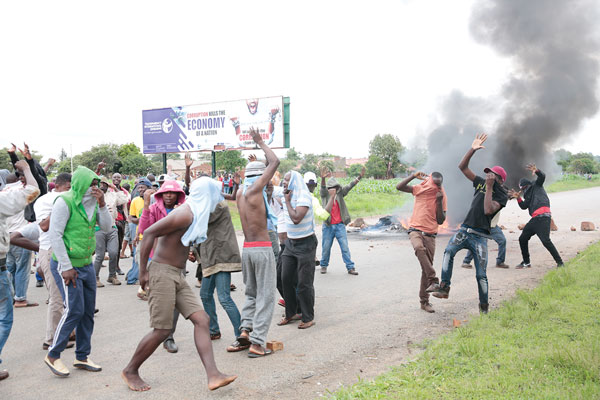 The 28 youths are facing assault and malicious injury to property charges.

They were remanded in custody to Friday.

They were arrested after allegedly assaulting the six soldiers and shattering their vehicle’s windscreen.

The army truck was ferrying pylons for Masimbaevanhu Clinic, which is being built by the Air Force of Zimbabwe as part of its community project.

The court heard that on Friday last week, Sifiso Kazela (17) of village 9 Samba Ranch, Triangle, and 27 others attacked the vehicle, resulting in the injury of its occupants.

The driver, Erick Moyo Mpilo, and five passengers are still nursing injuries they sustained during the attack.

The 28 youths are part of the 265 illegal settlers in Samba Ranch, who are resisting a High Court eviction order.

In April this year, Woolwork Investments (Pvt) Ltd trading as Samba Ranch through its lawyers Atherstone & Cook Legal Practitioners approached the High Court in a bid to get Muhlava Tsanganye and 264 others evicted from the farm.

The lawyers argued that the applicant purchased the entire shareholding of DM Bentley & Sons (Pvt) Limited in 2002 and started farming activities.

They also argued that in 2004, government issued a certificate of no present interest which was also produced in
court.

It was also stated in court that in 2015, Woolwork filed an application for the delisting of the farm, and the eviction order was granted by Justice Esther Muremba who removed the property from being State land.

This did not go down well with the illegal farmers who are determined to stay put.

The 265 families forcibly occupied the private property in 2004 despite government issuing out a certificate of no present interest on the farm.