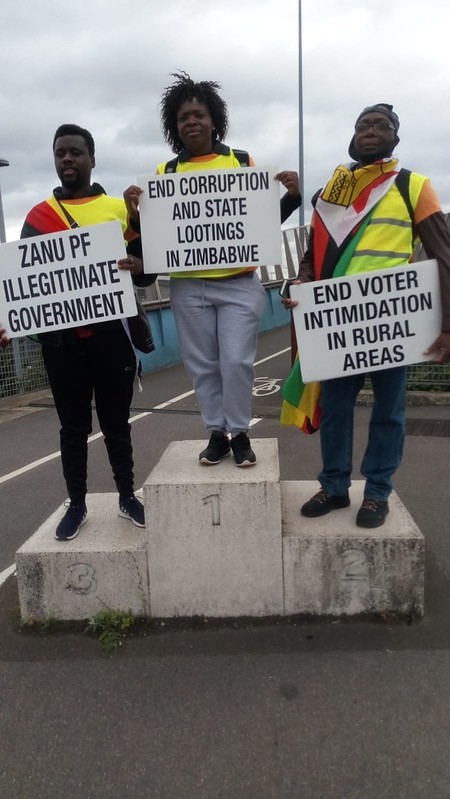 President Ramaphosa is to send another delegation to Zimbabwe following Mnangagwa’s refusal to allow the last South African envoys to meet the opposition to discuss the crisis facing the country.

Ramaphosa, speaking after an ANC meeting, said the party had resolved that it must engage all stockholders. He added that South Africa felt the challenges facing its neighbour and was keen to see an end to the crisis.

The MDC welcomed the decision but Mnanagagwa’s spokesman George Charamba was dismissive, saying that South Africa over-estimated its capacity to solve conflicts on the continent.

With typical Zanu PF pretentious arrogance he said: ‘Whence comes this impression that South Africa can intervene in Zimbabwe, assuming there are grounds for such intervention? On what basis, what might, what capacity, beyond that of solidarity, camaraderie and good-natured concern by a neighbour?

‘South Africa is the youngest state in our region. It faces myriad problems of a long apartheid. It has no capacity to help any African state in SADC, beyond friendly solidarity. Let that sink into minds of all and sundry.’

Charamba suggested that South Africa could not intervene in Zimbabwe except through SADC: ‘South Africa is no donor state in SADC. If anything, its long apartheid legacy makes its post-1994 subregional role quite problematic for the rest of SADC states who know the continued dominance of Afrikaner capital in SADC does not benefit the ANC or blacks in Soweto or Khayelitsha. That is the sordid truth.

‘South Africa cannot intervene militarily in any SADC country. That lesson was driven home during the Mandela days when it sought to do so in Lesotho. Since that disastrous escapade, South African diplomacy has been tempered and restrained to function within SADC structures, as should be! Just what is the logic and implication of Zimbabweans of insufficient history and national consciousness asking for South African intervention in Zimbabwe outside SADC structures?’

Charamba claimed ‘only Zimbabwe has the capacity to play a stabilising role in SADC’ while accusing South Africa of allowing itself to be ‘instrumentalised’ by Western powers against Zimbabwe. (See: https://bulawayo24.com/index-id-news-sc-national-byo-191365.html.)

The insulting language employed by such Zanu PF extremists as Charamba is characteristic of deranged cults as they approach Armageddon, displaying what psychiatrists might categorise as Tourette’s syndrome, when people say offensive things because they just can’t help it.

In last week’s diary we reported Zanu PF’s paranoid attack on senior South African official Lindiwe Zulu for saying there is a crisis in Zimbabwe. We refrained from mentioning that she was called ‘a stupid and idiotic street girl’ . . .

Recently the Ambassador of Zimbabwe’s most generous aid provider, the United States, was called an ‘Uncle Tom’ (meaning a black person who sides with the whites) for speaking of a crisis in Zimbabwe. Then there were the gratuitous insults levelled at the Roman Catholic Archbishop of Harare Robert Ndlovu. He was basically called an evil traitor for criticising the government’s handling of the situation. And of course human rights activists in Zimbabwe are routinely reviled as ‘foreign agents’ and accused of inciting violence . . .