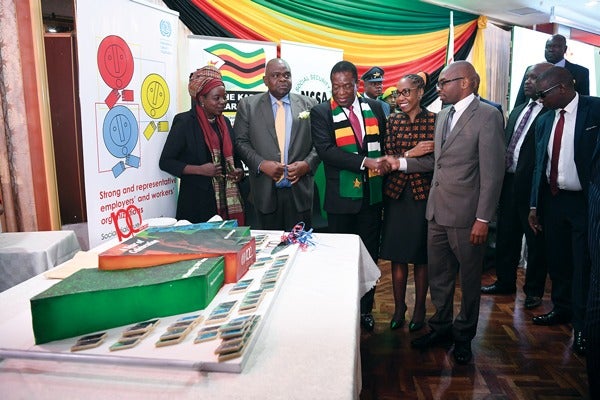 Mutasa is also threatening a fresh wave of demonstrations over the deteriorating economy.

Under fire from the failing local currency and an economy in a tailspin, Mnangagwa’s government is increasingly uneasy after Mutasa and the main opposition MDC have threatened to engage in peaceful demonstrations to force the government to act.

“In the second republic, let us shun the culture of militancy, disharmony and demonstrations. We must develop greater understanding of each other’s perspectives,” he said .

“Differing positions must be permissible within our country. However, these must never divide us or result in conflict. Violence must never be used as a tool to gain temporary advantage at the expense of the people we must serve and protect. That old and retrogressive culture will only serve to widen our fissures and exacerbate our socio-economic challenges and further delay the prosperity that our country so much needs and our people deserve,” he said.

In an effort to curb high prices and erosion of purchasing power, Mnangagwa said his government was looking at models which would lock value on workers’ salaries.

“(In relation) to the performance of the labour market and the current erosion of the value of salaries and wages by the unjustified price hikes, … (there is) need for more realistic and sustainable pricing models,” he said.
The ZCTU leader applauded the statements by Mnangagwa, saying the military and police should take heed to the calls by their leader.

“I think the President, when he said no to militancy, violence and disharmony, he was talking to the military and the police. It is them who have been bringing violence against labour and the people of Zimbabwe and it is our hope that they take heed to the calls to stop repression against the workers. We have no force and have no capacity to bring militancy to the government,” Mutasa said.

He said the suffering workers would now use the TNF to negotiate for currency reforms because salary negotiations were not yielding any results.

“If we negotiate and get say a 100% salary increase, prices of goods will go up. It is not salary negotiations that matter at this point. We now need currency reforms. So we are going to push through the convenor of the forum to meet the governor of the Reserve Bank (John Mangudya), the Minister of Finance (Mthuli Ncube), so that we have a currency reform agenda in play,” Mutasa said.

The ZCTU also insists that without a political solution, the economic crisis will continue, saying the TNF would raise those issues to ensure that the ruling Zanu PF party engages with the MDC, led by Nelson Chamisa, to bring an end to the economic malaise.

Mutasa said if negotiations failed or there was a deliberate attempt to slow down the process, workers retained their right to demonstrate, as enshrined in the Constitution.

TNF will allow government, labour and employers to sit on the same table and make binding legal agreements on social issues affecting production and labour.