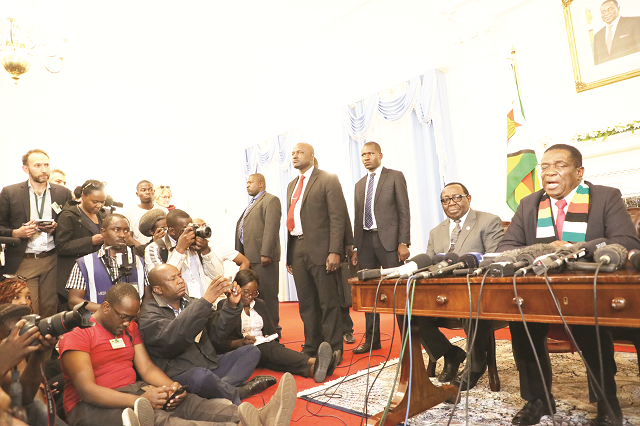 Kuda Bwititi, Harare Bureau
THE Zimbabwe Electoral Commission (Zec) has availed consolidated statistics for the Presidential election, including data from all V11 forms, in a development expected to give further credence to results of the plebiscite.

The release of the exhaustive data will help disaggregate the voting tally. Zanu-PF candidate Cde Emmerson Mnangagwa won 50,8 percent of the vote ahead of Mr Nelson Chamisa of the MDC Alliance, who amassed 44,3 percent of the 4,7 million valid votes cast.

The elections management body said those who want to query the data were free to take up the matter with them or with the courts. In an interview with our Harare Bureau yesterday, Zec acting chief elections officer Mr Utloile Silaigwana said the authenticated data will be availed in digital format.

“We now have all aggregated data for the elections and we will make it available for collection. The data has all the information on the harmonised elections and it is in digital CD format. What is important to note is that this information will be a reflection of all the V11 forms from all the 10 000 plus polling stations we had. This means the information will contain all the Presidential material at every polling station, at every ward, at every constituency and at every province. This information is easily analysable and searchable. We are inviting all the parties, in particular their chief agents to come and collect the CDs. We are also in the process of making sure that apart the CDs, this information will be accessible on our website soon.”

Mr Silaigwana said the electoral body welcomes any objections of the data.

“Everyone is free to make a complaint if they wish to because the data is easily accessible and analysable,” he said.

Consolidated data for the National Assembly and local authority elections will be availed later.

“We have decided to start with the Presidential elections first, but we are also in the process of compiling consolidated data of the V11 forms for the National Assembly and Local Authority seats in due course. You will appreciate that with the local authority, the data is humongous and it takes a bit more time,” he said.

In a separate statement yesterday, Zec said electronic copies of the Presidential election were now available.

“The Zimbabwe Electoral Commission (Zec) would like to advise presidential candidates or their chief elections agents that they can now come and collect electronic copies of the 2018 presidential election results at the Zec head office’s public relations department. These results will also be published in the press and on the Zec website www.Zec.org.zw, where other stakeholders can access them.”

On Friday, the US State Department press department spokesperson Mr Heather Nauert said the US welcomed Zec’s commitment to provide the amalgamated data for the Presidential election.

“The United States welcomes the commitment by the Zimbabwe Electoral Commission (Zec) to release comprehensive election results in a form that provides full transparency. The United States will continue to review the data collected by its own observation teams, by international observation missions, and by local observers to make a complete assessment of the overall election.”

During the election, political parties had polling agents who signed for results at every polling station, as well as agents at the ward, constituency and provincial levels to validate the primary figures to ensure full transparency.

Mr Chamisa has alleged the Presidential election was rigged but has failed to give evidence to support his claim.

The MDC Alliance has further promised to release V11 forms that he claims did not tally but he also failed to provide this evidence despite being challenged to do so by journalists.

Some of the opposition party’s senior officials were also circulating fake data on the election results. In particular,  on Wednesday Mr Chamisa’s spokesperson Dr Nkululeko Sibanda was circulating a document purporting that voters in Chiredzi North — where the MDC Alliance incidentally failed to field a candidate — were 30 688, yet official data shows that the voter population in the constituency stands at 44 233. Zanu-PF’s candidate in the constituency Roy Bhila amassed more than 35 000 votes.

Meanwhile, MDC Alliance member and outgoing Bulawayo South legislator Mr Eddie Cross says Mr Chamisa, who intends to challenge the Presidential election result, is wasting his time as the outcome of Monday’s harmonised election is a true reflection of the people’s will.

The July 30 elections, he said, were the most democratic elections ever held in the past 18 years.

The 78-year-old politician, who predicted Cde Emmerson Mnangagwa’s victory before the polls, said it is time the country gets down to business.

“Let’s get down to business and start rebuilding Zimbabwe. We must work together and I have no doubt about the outcome. Zimbabwe has the potential to move forward and together in peace and unity, we can achieve that. I doubt that the courts will overturn the results. The people spoke and their will has to be respected. These were the most democratic elections since 2000,” said Mr Cross.

Mr Cross urged President Mnangagwa to put together a competent Cabinet to turn around the economy. Last week, the Zimbabwe Election Support Network endorsed both Presidential and Parliamentary results and said that their figures were tallying with those released by the Zimbabwe Electoral Commission.