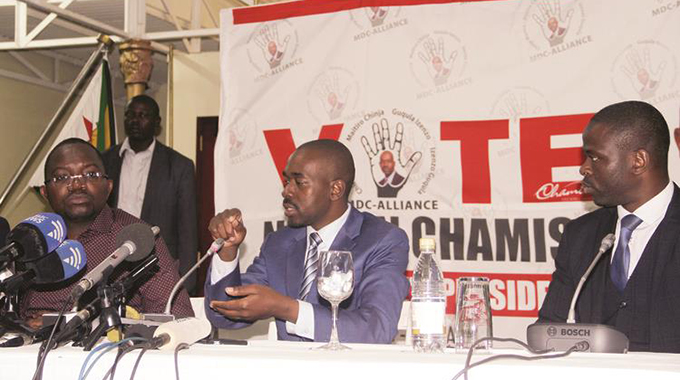 Felex Share Senior Reporter
The Zimbabwe Electoral Commission (ZEC) yesterday reported MDC-Alliance presidential candidate Mr Nelson Chamisa to the police after he convened a Press conference in Harare which had to do with today’s harmonised elections. The Press conference appeared like a voter education exercise where the alliance’s legal advisor Advocate Thabani Mpofu incited supporters to camp outside polling stations immediately after voting.

Campaigning for political parties and candidates ended on Saturday night in accordance with the Electoral Act.
Police yesterday warned Mr Chamisa and his team saying law enforcement agents would deal with them decisively.

ZEC acting chief elections officer, Mr Utoile Silaigwana said: “The Zimbabwe Electoral Commission has noted with concern the violation of the Electoral Act (Chapter 2:13) by one of the candidates contesting in the 2018 harmonised elections.

“Clause 7 (1)(b) of the Code of Conduct for political parties and candidates and other stakeholders provides as follows: (1) No political party or candidate may, from midnight 24 hours before polling day in any election or referendum until polling stations are closed on that day publish, or cause or permit the publication, of any advertisement or statement promoting or opposing a particular party or candidate. It has come to the knowledge of the Zimbabwe Electoral Commission that one of the Presidential candidates today, the 29th of July 2018 held a Press conference at Meikles Hotel, in direct contravention of the provisions of the Electoral Act Fourth Schedule (Section 160A, Clause 7(1)(B).

“This matter has been reported to the police for investigation on possible infraction of the electoral law,” said Mr Silaigwana.
Adv Mpofu said MDC-Alliance supporters should camp outside polling stations to protect the “integrity and sanctity” of their vote.

“People are free to have a gathering as long as they do not exceed 12,” he said.
“After voting, we urge people to remain at polling stations to ensure that the vote they have cast is given effect.”
On his part claimed Zanu-PF was working against foreign computer experts to vilify him.

“The police is disturbed by utterances attributed to some politicians who are openly urging voters to gather at polling stations after casting their votes,” he said.

“This stance is unlawful in terms of the Electoral Act, Chapter 2:13 and Public Order and Security Act, Chapter 11:17.
“Individuals, groups and politicians who are inciting members of the public to gather at polling stations are strongly warned that the law will take its course without fear and favour.

“Anyone who interferes, disturbs or obstructs the smooth running of business at any polling station will be committing an offence and liable to arrest and prosecution.”

Snr Ass Comm Makodza added: “Potential voters are urged to cast their votes and go back to their homes and continue with their various activities peacefully.

“The police and other security services are on full alert to ensure that the internal security of the country is maintained throughout the election period.”

He commended Zimbabweans for maintaining peace ahead of the polls.
“May I assure the public, media, observers and other stakeholders that the Zimbabwe Republic Police has made adequate security deployments throughout the country to ensure there is law and order at all polling station, residential areas, CBDs, resort centres and other places of public interest.”