Zesn under scrutiny over election report 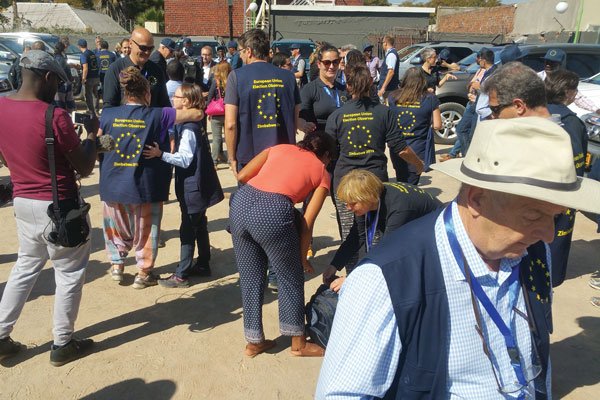 The Zimbabwe Election Support Network (Zesn), an independent electoral watchdog, has been under tremendous pressure from European Union (EU) donors, particularly Britain, to doctor and alter its reports on the country’s electoral process and elections, the Zimbabwe Independent can reveal.

Sources within the donor community say throughout Zimbabwe’s electoral cycle, Zesn was forced to change the biometric voter registration (BVR) report. The report was commissioned to undertake an audit of BVR as well as election outcome findings.

The electoral watchdog received funding from Western donors to conduct civic and voter education, as well as deploy 6 500 observers to every ward, constituency, district and province, throughout the country.

Zesn deployed 2 012 observers to keep an eye on the BVR process. In addition, Zesn also deployed long-term observers (LTOs) in all 210 constituencies to observe key electoral processes in the run-up to the elections such as inspection of the provisional voters’ roll, nomination court processes, campaigns and the general pre-election environment.

Zesn reports were largely positive and passed glowing remarks on how the Zimbabwe Electoral Commission (Zec) had administered what was described as a relatively credible poll. Zesn’s poll forecasts were also not off the mark from the final results announced by Zec.

Contacted last night, Zesn programmes co-ordinator Ellen Dingane told the Independent she could not comment on the matter and referred all questions to the organisation’s chairperson Andrew Makoni who was not immediately available.

In his opposing papers filed at the ConCourt, Mnangagwa, using Zesn reports, argues that Chamisa’s claims that 21% of polling stations around the country had no V11 forms were baseless.

“The applicant is challenging the results of an election conducted on 30 July 2018. What has allegedly happened to his agents after that date is irrelevant to this application.

“In fact, as confirmed by Zesn (annexure ‘CC’) it is applicant and his political party that did not have polling agents at all polling stations,” Mnangagwa says.

Zec, in its opposing papers filed at the ConCourt, also cites reports from Zesn extensively to water down claims of electoral fraud raised by Chamisa.

“If one considers sampling that was being done during the conduct of the 2018 general election by the largest election observer group on the ground, Zesn, their report shows consistency with the results declared for the presidential election by the electoral commission,” Zec says.

Zesn received a substantial amount of money to roll out various electoral supervisory activities under the instruction of Western donors, especially Britain.

However, their reports and findings have been sanitised and altered due to pressure, while its narrative has been tailored to suit the agenda of its donors in Zimbabwe who support Mnangagwa, especially Britain.

Shortly after announcement of the poll outcome, Zesn released a statement suggesting that 21% of polling station V11 forms were missing. The independent electoral watchdog, however, quickly withdrew that statement under pressure from donors.

“Zesn have just produced a report which states that in 21% of polling stations no V11 form was posted outside with the presidential results on it as required by Section 64(1) of the Electoral Act,” said former legislator David Coltart through micro-blogging site Twitter.

Britain, whose ambassador Catriona Laing is a known Mnangagwa cheerleader, has been trying to sanitise last year’s military coup that toppled former president Robert Mugabe, while warming up to Mnangagwa’s new administration. When election results came out, Zesn’s poll prediction closely resembled the actual vote result announced by Zec. This week, Zesn sought to pre-empt criticism and exposure through an op-ed published in this week’s edition of the Independent, acknowledging that its earlier announcement on the credibility of the just-ended poll had torched a storm of controversy.