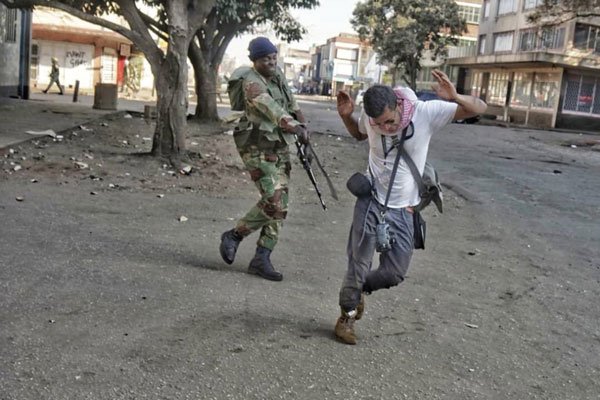 ZIMBABWE’S renewed efforts under President Emmerson Mnangagwa’s administration to mend relations with the West and re-join the international community suffered a major setback after the United States extended sanctions against the southern African country, outlining key reforms Harare should implement before the embargo can be scrapped.

The US insists the embargo will only be scrapped if Harare shows commitment and political will to return to democracy through fostering the rule of law and holding credible elections, among other key reforms. Last month’s landmark polls, widely expected to open a new chapter for Zimbabwe to restore cordial relations with the West, were marred by violent protests that erupted in the aftermath of the July 30 general election.

Washington renewed sanctions against Zimbabwe after the country held a relatively peaceful but disputed poll whose aftermath was marred by violent protests which claimed at least six lives in the wake of the military’s intervention to quash a demonstration. Mnangagwa polled 50,8% of the vote, narrowly beating his closest rival MDC Alliance candidate Nelson Chamisa who obtained 44,3% of the ballot.

Chamisa is contesting the declared result at the Constitutional Court.

The European Union (EU), though it has gradually eased its own set of restrictive measures against Harare, noted that Zimbabwe had failed the poll credibility test, further denting efforts to repair broken fences with the bloc. The bloc has also emphasised that re-engaging with Harare would, among other conditions, be based on the credibility of the recently held elections.

The US slapped Harare with sanctions in 2001 under the Zimbabwe Democracy and Economic Recovery Act (Zidera) during former President Robert Mugabe’s 37 years of ruinous rule which saw the southern African country plunging into an economic crisis and civil unrest.

The embargo is meant to encourage Zimbabwe to uphold human rights as part of a reform framework Harare should implement to end international isolation.

Mugabe’s belligerent stance, particularly against Britain and the US, punctuated by decades of flawed elections and gross human rights abuses, condemned Zimbabwe to isolation as the West piled pressure on Harare through the imposition of sanctions.

Compounding Zimbabwe’s decades-long economic crisis, the country is also suspended from accessing fresh lines of credit from international financial institutions for failing to extinguish an over US$12 billion external debt. The international lending institutions have also cobbled together a cocktail of structural reforms Zimbabwe should implement to unlock fresh lines of credit.

Mnangagwa’s ascendance to power last year through a millitary coup that toppled Mugabe was widely expected to set the tone for Zimbabwe’s renewed efforts to reengage with the West, while adding impetus towards the drive to put the country’s fragile economy on a firm recovery and growth trajectory. Until the botched election scuttled the re-engagement efforts, the West had, by some measure, generally warmed up to Mnangagwa’s “Zimbabwe is open for business” mantra, with the United Kingdom (UK) extending a US$100 million facility in over two decades to help the southern African country revitalise its fragile industrial base.

However, the West has led the chorus of international condemnation against the heavy handed approach by Zimbabwe’s heavily militarised state in quelling violent protests that erupted after the announcement of the disputed poll results. The US, in particular, has castigated the reported abduction of opposition activists in the wake of post-election protests that rocked Harare.

Washington has also raised the red flag over the deportation of MDC Alliance principal Tendai Biti from Zambia and his subsequent arrest by local security agents on charges of inciting political violence and flouting the electoral law. The US is also considering reviewing its aid to Zambia. While Zimbabwean authorities expressed dismay at the latest renewal of sanctions in over a decade by the US, Harare can only normalise relations with the world’s most prosperous nation if the pariah state takes bold steps to implement the raft of reforms Washington has spelt out.

Fostering democracy, upholding the rule of law and human rights as well as holding credible polls are some of the sign posts that Washington has flagged for Harare to emerge from the woods of international isolation.

Judging from the US stance, it is almost clear that no amount of rhetoric and piecemeal reforms by Mnangagwa’s administration would thaw frosty relations between the two countries, critical for Zimbabwe to rebuild its broken economy.

Analysts say that the preconditions set by the West and in particular the US, to normalise relations with Harare, are not unreasonable in the circumstances.

Rhodes University political science lecturer Mike Mavura said without implementing the required re-engagement reforms, Harare would continue to languish in isolation, while missing the golden opportunity to restore relations with some of the world’s wealthiest nations.

“The onus was and is on Harare to take the necessary steps to have sanctions removed. The conditions for the removal of sanctions are not outlandish. A credible, free and fair election would have sent the right signals to the world.

“Instead, the world saw soldiers shooting and beating up people on the streets of Harare. That is an own goal.

Those “jujitsu” games with AK7s and whips on Harare’s streets in full view of the international media makes diplomatic manoeuvring difficult in efforts to normalise relations,” Mavura said.

Political analyst Maxwell Saungweme said the controversial deployment of gun-toting soldiers on the capital’s streets to quell a demonstration by the opposition would dampen hopes of normalising relations with the US.

He said the re-engagement conditions set by the US are not preposterous.

“Harare simply needs to do the needful to get the sanctions scrapped: remove the military from civilian and political affairs; respect for human rights; stop elections theft; realign laws to the Constitution; account for Itai Dzamara and other disappeared human rights defenders,” he said..

As the US sanctions enter a second decade, Harare will continue to lurch from one economic crisis to another, missing the golden opportunity to re-engage with the world’s wealthiest nation to ensure recovery.