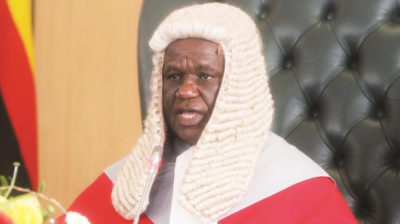 Zimbabwe is hurtling into a constitutional crisis with the two recent amendments to the national constitution.

Constitutional Amendment No 2 Bill has been hurried through at great speed: it was passed by the Senate on May 4, and just three days later, President Emmerson Mnangagwa assented to it, a circumstance that marked the commencement of the amendment’s life as a law.

The unseemly rush, it appears, is linked to the imminent retirement of the current Chief Justice, Luke Malaba, whose biological clock strikes 70 years old this month.

Seventy is the mandatory age of retirement for judges in Zimbabwe.

The amendment extends the retirement age of judges to 75 years, which the government hopes will provide the kiss of life to a long judicial career that had become comatose by operation of law.

However, not even this legal kiss of life is enough to save the chief justice.

Using this chance to extend his term of service beyond 70 years would not only be unlawful, but a gross abuse of the constitution.

This subject is discussed in more detail in this article, in which I argue that the rushed and illegal amendments are plunging the country into a complex web of constitutional crises.

It undermines the legitimacy of the system of government, making it extremely difficult to govern with consent so that the government becomes ever more reliant on force and extra-legal mechanisms.

The constitution is the supreme law of a country and it is supposed to have mechanisms to resolve political disputes and other problems.

If it becomes fundamentally broken leaving it incapable of resolving a standoff or other major political problem, then commentators start describing it as a crisis of the constitution.

There are different sets of circumstances that result in a constitutional crisis and some crises might be bigger than others.

Some constitutional crises might be resolved in a short space of time, usually by one side of an impasse standing down.

But some crises might linger for years, affecting the legitimacy of the government.

Oft-times, norms that have been developed over time help to avert or to resolve a constitutional crisis.

Norms can loosely be defined as unwritten rules that are developed by and mediate relationships between political actors within a country.

One of the norms that I have often referred to drawing from the work of Levitsky and Ziblatt is “forbearance”, which describes an unwritten understanding where someone who has power deliberately withholds it and avoids using it in favour of another more cordial approach.

Older democracies that have long-standing political practices and traditions have the advantage of having developed these unwritten understandings that operate silently to avert crises.

In countries like Zimbabwe, a show of power by the ruling elites is considered more appropriate.

There is no room for forbearance and ruling elites like to demonstrate the full might of the state whenever an opportunity presents itself.

Due to this rigid and inflexible approach, there are greater risks of constitutional crises and Zimbabwe has had its fair share.

Before November 2017, the most infamous rupture of the constitutional order occurred on November 11, 1965, when the regime of Ian Douglas Smith unilaterally declared independence from Great Britain, the colonial power.

Eventually, the Judiciary gave in, recognising the illegal Smith regime as the de facto government of the day.

Two judges, Fieldsend and Dendy Young resigned in protest at the constitutional illegalities.

The governor also seemed to give in when the stand-off intensified. However, the crisis of illegitimacy never went away.

It led to the intensification of the war of liberation in the 1970s.

An attempt to patch up a solution via the internal settlement with Bishop Abel Muzorewa in 1978 had a miserable lifespan.

It was not until the Lancaster House Constitution Agreement in 1979 and the elections in 1980 that the path to constitutional legality and legitimacy was finally restored.

A constitutional crisis might arise where there is a deadlock between the key arms of the state.

This may happen where a court issues an order, which the Executive refuses to obey.

Courts make decisions, but they have no power to enforce those decisions.

Enforcers fall under the Executive’s structures and a refusal to enforce court decisions is a manifestation of a constitutional crisis.

It would mean the system is no longer functioning, according to constitutional rules.

There was such a constitutional crisis in 2000 when the courts issued orders for people, who had occupied the then white-owned commercial farms, to vacate, but the government withheld enforcement of those orders.

The stand-off led to the escalation of tensions between the Executive and the Judiciary, a deadlock that could only be resolved by one of them backing down.

After an unprecedented invasion of the Supreme Court building by rogue war veterans, Patrick Chinamasa, who was the Justice, Legal and Parliamentary Affairs minister, told the Chief Justice that his safety could no longer be guaranteed.

Thereafter, the Judiciary backed down. The then Chief Justice Anthony Gubbay was forced to take early retirement before a mass exodus of judges followed soon afterward.

The constitutional crisis ended with the fundamental complete reconstituting of the Judiciary, which resulted in a more Executive-friendly bench.

But that apparent “capture” of the Judiciary might also be regarded as a manifestation of a constitutional crisis.

The military command structure was subverted when the military commanders deployed soldiers in the streets of Harare without the authority of and against the orders of their commander-in-chief, contrary to requirements of the constitution.

There were attempts to cover up these constitutional violations by roping the Judiciary to issue orders that the deployment was lawful.

For nearly a week, there was an impasse between the Executive and the military.

The deadlock was only loosened when then-president Robert Mugabe resigned.

He later confirmed what was apparent at the time, that he had resigned under duress.

Parliament had been roped in to impeach him, which left him without a choice.

This veneer of legality provided by the courts and the resignation did nothing to cure the legitimacy deficit caused by the constitutional crisis.

A third situation in which a constitutional crisis might arise is where individuals and institutions entrusted with upholding and defending the constitution cause its violation or fail to protect it.

No matter how well-crafted it is, a constitution cannot enforce itself.

Ultimately, it depends on individuals and institutions who have the power to carry out and implement its requirements.

The constitution is at their mercy.

If they decide to ignore it or if they actively breach it, there is not much that the constitution can do to protect itself.

This would be a major constitutional crisis in which a cocktail of illegalities predominates.

All arms of the state, that is, the Executive, Legislature, and Judiciary must uphold and defend the constitution.

They pledge fidelity to the constitution.

By ignoring and violating the constitution, they would be committing constitutional infidelity.

In the flowing part, I explain the phenomenon of constitutional infidelity in respect of the two amendments.