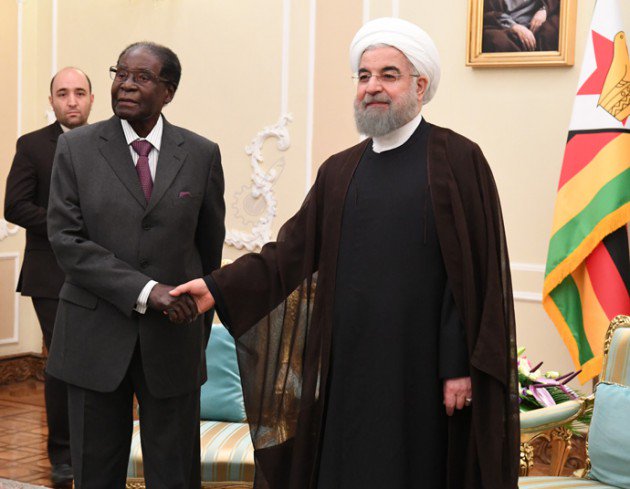 From Mabasa Sasa in TEHRAN, Iran
PRESIDENT Mugabe yesterday met his Iranian counterpart, Hassan Rouhani, in Tehran, with the leaders of the two nations emerging from their discussion determined to boost co-operation and overcome common adversity.

The closed-door talks began mid-morning local time and continued for more than an hour.

The meeting was initially scheduled to be held on Sunday, a day after President Mugabe joined other world leaders and/or their representatives from at least 100 countries to witness Mr Rouhani’s inauguration for a second term as Iran’s president.

The anticipation ahead of yesterday’s engagement was that Zimbabwe and Iran would discuss how best to advance the already strong political and cultural ties between the two countries so that they extended more fully into the realm of the economy.

And after yesterday’s meeting, it appeared this deepening of relations was well on track, with Minister Mumbengegwi telling the media the chemistry between the two leaders boded well for their common agenda.

“Iran also has a very highly developed science and technology sector. Again the two leaders discussed how the two countries can co-operate in that area in the context of higher education and our new focus on STEM.”

He said discussions also dwelt on agricultural co-operation, and that the Zimbabwe-Iran Joint Commission could meet this year to “rejuvenate and resuscitate” existing agreements, “as well as look at new areas of co-operation”.

Minister Mumbengegwi said President Mugabe had invited his Iranian counterpart to visit Zimbabwe, and they were confident that the invitation would get a favourable response.

Four Iranian leaders have visited Zimbabwe over the past three decades, and this is President Mugabe’s fifth visit to the Middle Eastern oil and gas giant.

The ties between the two peoples date back to 13th century trade in ivory and gold.

Iran — variably known as Persia through history — is itself home to one of the world’s oldest continuous major civilisations dating back to 7000BC; while Zimbabwe can trace its history to the arrival of Bantu-speaking people some 2000 years ago.

That the two nations should cross paths by the 13th century was due to their shared desire to trade and grow peacefully; relations that were first interrupted by the arrival of the Portuguese on Africa’s east coast soon after, and then aggressive colonial expansion by a host of European countries in subsequent decades.

Zimbabwe and Iran were to reassert their identities as sovereign nations at around the same time, both of them fending off Anglo-American domination of their peoples and territories.

For Iran, the definitive moment was to come in 1979 when Ayatollah Ruhollah Khomeini removed the American-backed Shah Mohammad Reza Pahlavi autocracy in the popular Islamic Revolution.

In Zimbabwe, the quest for nationhood was to come months later when nationalist fighters pushed the racist British-backed Ian Douglas Smith colonial dictatorship to the negotiating table after more than a decade of war.

In 1979, the late Vice-President and national hero Dr Simon Muzenda was to visit Iran to express solidarity with the Islamic Revolution, and for years now the two countries have maintained diplomatic relations, with leaders from both sides visiting each other regularly.