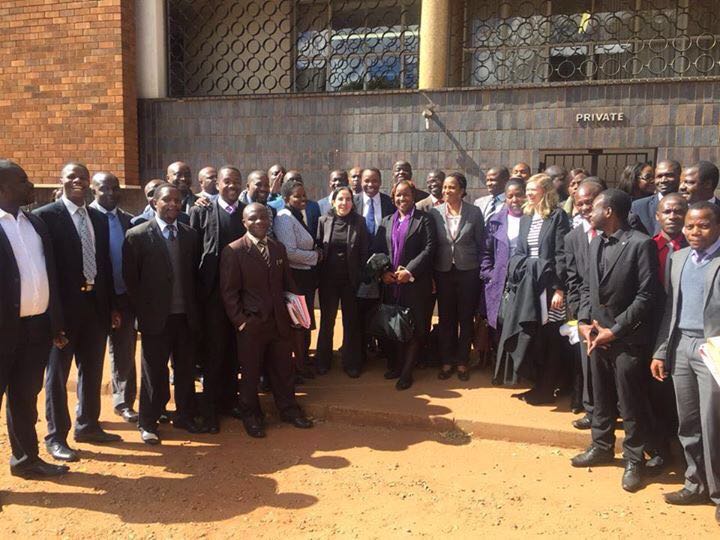 Magistrate Ngoni Nduna on Tuesday barred Mtetwa from representing Chin’ono, who is accused of inciting public violence ahead of last month’s foiled protests.

Chin’ono was arrested together with opposition Transform Zimbabwe leader and July 31 protests organiser Jacob Ngarivhume and are being charged with inciting violence.

They remain in prison and are locked up at Chikurubi Maximum Security Prison.

The European Union and the Johannesburg Society of Advocates (JSA) yesterday condemned Nduna’s decision, describing the barring of a lawyer from representing a client as an affront to constitutionalism.

The European Union in Zimbabwe said the authorities must respect the rights of arrestees to be represented by a lawyer of their choice and for the Judiciary to be impartial in the discharge of its duty.

“Following Hopewell Chin’ono’s case closely, we urge the authorities to respect the right of accused persons to bail and representation by a lawyer of their choice. We call on the Judiciary to discharge their duties impartially, expeditiously and without prejudice,” the EU in Zimbabwe said yesterday.

The JSA also said the move was a violation of the rights of the accused person to have a legal representative of their choice.

“Apart from the questionable factual and legal basis of the ruling, it is furthermore disappointing that concern for the rights of the accused does not appear to have featured in anyway in the magistrate’s consideration of the matter, let alone given pause for thought in extending the duties of the prosecutors to the defence of the counsel,” the advocates said in a statement.

“The JSA continues to stand in support of the lawyers, including Mrs Mtetwa, representing those seeking to exercise their democratic and constitutionally-enshrined rights to express criticism of the government of Zimbabwe.”

The lawyers added: “It is crucial that courts and court officials should maintain their independence and impartiality in such matters and not abuse their positions or act outside of the bounds of their authority to trample on the human rights of litigants, especially arrestees. These matters go to the heart of the rule of law and constitutional democracy.”