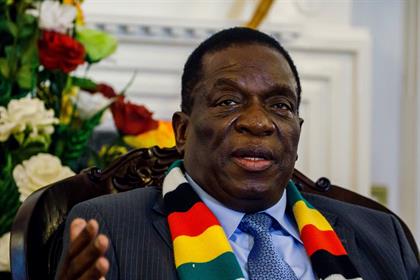 Zimbabwean President Emmerson Mnangagwa’s cabinet is reportedly divided over a new 2c per dollar tax which has been imposed on electronic transactions by Finance Minister Mthuli Ncube.

A currency crunch and a new tax on electronic transactions has spawned fears that Zimbabwe’s wrecked economy is about to endure a fresh bout of chaos, reported AFP.

Mnangagwa had campaigned on a pledge to revive the economy, attract foreign investment and create jobs.

But less than three months after the vote, the dire financial problems of former president Robert Mugabe era have returned to haunt the new leader.

The latest crisis erupted last week when the finance minister announced the 2c tax on all electronic transactions to increase revenue.

Many Zimbabweans relied on electronic payments as US dollars, which functioned as the main currency, were scarce, and the local “bond note” currency was little trusted.

According to Daily News, unnamed sources said that ministers in social services were worried that the new tax would damage the new government’s image after the new austerity measure was resoundingly rejected by the public.

Some ministers – even in the economic ministries – were among the first to go public in urging the government to backtrack on the new austerity measures, said the report.

Energy minister, Joram Gumbo warned that the new measures would lead to massive fuel price increases which would potentially lead to chaos in the economy.

Small to Medium Enterprises Minister Sithembiso Nyoni reserved her reservations over the matter, saying that while there were benefits from the austerity measures, a thorough study of issues was needed – including an input from stakeholders.

This came amid reports that the tax was supported by President Emmerson Mnangagwa, who said in a post on Twitter that this was “the only way to a stronger economy”.

The tax announcement triggered price hikes and shortages of fuel and some basic commodities like cooking oil.