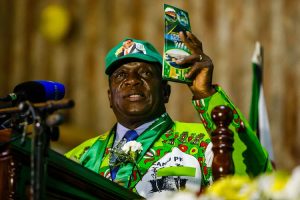 MDC-T (Chamisa) activists and supporters of the MDC Alliance have vowed to fight Emmerson Mnangagwa and Zanu PF for the former’s role in denying them their right to vote in the harmonised 2018 national elections which take place on 30 July 2018.

President Emmerson Mnangagwa lifts the the manifesto booklet during the launch of the Zanu PF election Manifesto ahead of the 2018 harmonised general elections in Zimbabwe May 4 218.

“Those of us in the Diaspora who have been denied an opportunity to cast our votes by Emerson Mnangagwa will punish him and his party in the ballot box by encouraging all our families and friends in both rural and urban areas to vote Zanu PF out. We are tired of bailing out our families and friends who should be able to fend for themselves in a functional economy. Mnangagwa is directly responsible for denying us our right to vote as he was the Minister of Justice between 11 September 2013 and 9 October 2017. He made sure that the Electoral Act was not aligned to the Constitution so that the millions of Zimbabweans cannot vote in the next election”, said an emotional George Murakwani of Wellington, New Zealand.

The Constitution of Zimbabwe gives the right to vote to all Zimbabweans eighteen years and above, but the country has not aligned electoral laws to the new constitution to create the processes necessary to allow Zimbabweans living outside the country to vote. Zimbabweans are infuriated by the inability of those in the Diaspora to vote when foreigners from other countries living in Zimbabwe can vote during elections in their respective countries. “If Mozambican nationals living in Zimbabwe can vote, with the Government of Zimbabwe providing support for that, why should we the Zimbabweans living in other countries be denied the same rights. As Minister of Justice, Mnangagwa had the authority to implement the alignment of the Electoral Act to the new constitution which gives Zimbabweans living outside the country the right to vote, so he must be personally made accountable for his role in denying us the vote”, queried Sydney based  Shandirai Mangwiro.

Henry Jaji, an economist based in  Melbourne, Australia, weighed in “As diasporas we know that the evil regime denied us our birth right by refusing us to vote. The vision is too big to be aborted, we will do our part to support our president, Advocate Nelson Chamisa.  The bullet train is too big to be derailed, we will continue lifting the hands of our president until he  delivers”.

Jaji is a firm believer in opposition leader Nelson Chamisa’s vision which he sees as a panacea to Zimbabwe’s problems added “We have read his  vision and engraved it on the tablets of our hearts. We will continue running with it until we test victory. Our love for Zimbabwe is second to none, thus, in President Nelson Chamisa, we know we have a leader capable of delivering”

There is a feeling that the Zanu PF Government in Zimbabwe has always been against its citizens who left the country in their millions in the first decade of the twenty first century to escape Zanu PF brutality or eke to a living following the collapse of the economy. Those who left were labelled as sell outs. “Under Zanu PF rule in Zimbabwe, you either have to like Zanu PF, or else you are described as an enemy of the state”, says Tawanda Machingura of Brisbane.

Current President Emmerson Mnangagwa’s claim that Zimbabwe has changed under his leadership is dismissed as a false claim as his words contradict the situation obtaining on the ground. “Emmerson Mnangagwa may want to fool the world that he is different from his mentor Mugabe, but it is the same Emmerson Mnangagwa who is turning a blind eye to school children being frog-marched to attend his rallies until the High Court ruled against this abusive act.  It is the same Emmerson Mnangagwa who cannot discipline his Finance Deputy Minister Terence Mukupe for physically assaulting a senior government employee. Mnangagwa does not say a word when Mukupe tells the world that the army will not overthrow a constitutionally elected President if Mnangagwa does not win the election, the same thing that used to happen during Mugabe’s reign. Emmerson Mnangagwa has not raised a finger against traditional leaders who unconstitutionally campaign for his party, intimidating gullible villagers in the process despite a court ruling against such practises”, said Melbourne based Chemical Engineer Larvern Nyamutswa.

Most disappointing to the Zimbabweans living in Australasia is that the army have recently been used to force people to stay at a rally Mnangagwa was addressing in Bindura, when they realised his speech was empty and had no solutions to the country’s challenges and started walking out. Some of these people would have been ferried from faraway places overnight. “What does Mnangagwa think those in the diaspora who have family and friends being beaten by soldiers to stay to hear his boring speech think. I will certainly tell all my friends and family to vote for an alternative government” is what Tashinga Murare of Wellington, New Zealand had to say.

The Chamisa led MDC-T in Australia and New Zealand is mobilising support for the MDC Alliance in the coming election, and is calling on all progressive Zimbabweans living in abroad to play a part. “There has been excitement about the prospects for positive change in Zimbabwe, and in the past three weeks we have seen Zimbabweans in Australia and New Zealand rallying behind the candidature of Advocate Nelson Chamisa, and we are calling out to the like-minded to join hands with us to complete the change”, said New Zealand based newly appointed party Representative Driden Kunaka.