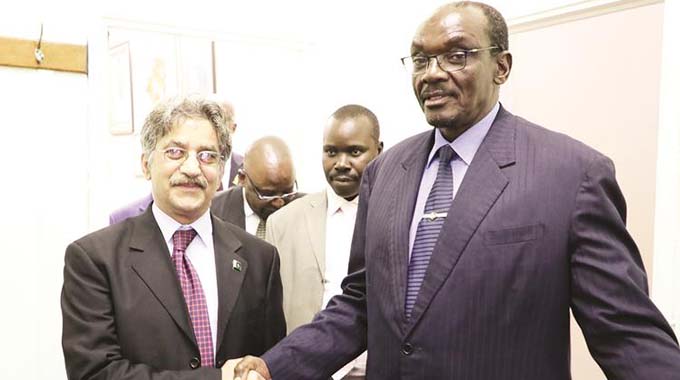 Elita Chikwati Senior Reporter
Zimbabwe and Pakistan are set to revive the Joint Economic Permanent Commission that oversees the two countries’ economic relationship and co-operation in different areas chief among them agriculture, science and technology.

This came out after a meeting between Acting President Kembo Mohadi and Pakistan Ambassador Mr Riaz Bukhari who paid a courtesy call on him yesterday.

In an interview after the meeting Acting President Mohadi said Zimbabwe and Pakistan had strong relations dating back to the 1980s.

He said there was need to revive the commission to strengthen relations and economic ties between the two countries.

“We discussed quite a number of bilateral issues. When it comes to the Joint Economic Permanent Commission, it had just gone to sleep and I think the last time we had it was in 1995 and it is high time that we revive that commission.

“It is in this commission that we are going to discuss quite a number of issues pertaining to investments and other bilateral relations particularly investments because there is a lot that we can learn from Pakistan in terms of agriculture, transfer of technology and many other things. The Pakistanis were there before us and they are still a step ahead of us, so we are going to co-operate more in those areas,” he said.

Acting President Mohadi applauded Pakistan for playing an important role in the formation of the national army and training of the air force in the early 80s.

“We remember when we started coming into being, when we had to build an army and our air force the Pakistanis were very helpful. They came here to train our air force.

“The air force that you pride yourselves with today was trained by the Pakistani at no cost at all. They trained our technicians and pilots and today we have got an air force. We owe that to the co-operation between ourselves and Pakistan,” he said.

“We discussed political cooperation, agriculture and economic issues. We have discussed and covered those areas and I am sure from henceforth the minister of foreign affairs is responsible when the joint Permanent Commission comes here, it will cover quite a range of issues that will enhance our co-operation and the relations between our two countries,” he said.

Ambassador Bukhari said he had also come to congratulate President Mnangagwa and thank him and the nation for the lovely time he had in Zimbabwe.

“We discussed important things related to our bilateral relations. It is high time that we set an agenda and start working to implement it.

“We have excellent political co-operation with Zimbabwe. We would like that goodwill on both sides to translate into an improvement in our economic, trade relations defence, technology agriculture particularly irrigation. We are available. Zimbabwe can count on us.”