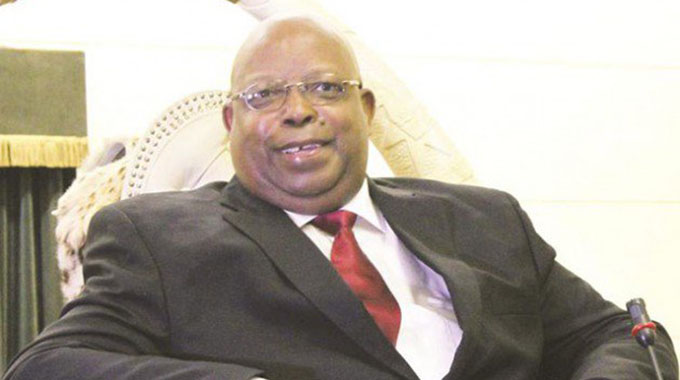 From Moses Magadza in Luanda, Angola
Speaker of the National Assembly Advocate Jacob Mudenda has briefed the 43rd Plenary Assembly Session of the SADC Parliamentary Forum on the Zimbabwe’s preparedness for harmonised elections scheduled for July 30 2018.

Adv Mudenda spoke yesterday, immediately after the 14-member regional body issued a strongly-worded statement condemning a suspected grenade attack at a rally that President Mnangagwa had addressed in Bulawayo on June 23, 2018.

The statement, read out on behalf of the forum by Mozambican parliamentarian Jaine Bessa Augusto Neto, also condemned a grenade attack that appeared to have targeted Prime Minister of Ethiopia, Rt Hon Abiy Ahmed, on the same day.

“We strongly condemn these heinous and barbaric acts of terrorism, which are an affront to the peace and tranquillity prevailing both in Zimbabwe and Ethiopia and the African continent as a whole,” the statement read.

The plenary, which is the supreme decision-making organ of the SADC PF, said the region’s MPs could not remain silent while “criminals and violence perpetrators attempt to create instability, chaos and despondency in these two sovereign states, in the region and in Africa in general, by subverting the will of the people to be governed democratically and peacefully”.

The plenary enjoined the people of Zimbabwe and Ethiopia to remain united in the face of “cowardly and desperate attacks” on their sovereignty and democracy.

Through the statement, the SADC Parliamentary Forum conveyed condolences to the families of people who died in the attacks and wished the many that were injured speedy recovery.

“The law must take its full course in pursuing and bringing to book the enemies of peace who committed these heinous acts of terrorism,” the plenary said.

The SADC PF statement followed a similar statement by the President of Angola Joao Lourencio. Adv Mudenda told the plenary that Zimbabwe’s election roadmap for the harmonised elections was formally set in motion by a proclamation issued by President Mnangagwa, setting July 30 as the date for the elections.

“Section 143 (1) of our Constitution clearly provides that the life of Parliament is five years beginning on the day the President-Elect was sworn in and that Parliament stands dissolved at midnight on the day before the first day of the elections, which is 29 July 2018. Section 158 (1) of our Constitution states that a general election must be held not more than 30 days before the expiry of the five-year period specified in Section 143 (3) of the national Constitution cited above. Accordingly, nomination courts sat on 14th June 2018,” Adv Mudenda explained.

He said the Zimbabwe Electoral Commission (ZEC), is an independent commission established in terms of Section 238 of the Constitution to manage presidential, parliamentary and local authority elections, would prepare for, conduct and supervise elections “in such a manner that they are conducted efficiently, freely, fairly and transparently in accordance with the Electoral law as provided for in section 239(a) of our Constitution”.

The Speaker said all election observers would be accredited by the Zimbabwe Electoral Commission in terms of Section 239(i) of the Constitution of Zimbabwe. He revealed that pre-election observation missions from the United States, European Union, the United Nations and the Commonwealth had already visited Zimbabwe, while the electoral commission had assured Zimbabwe and the international community that the elections would be conducted democratically in a peaceful political environment.

Adv Mudenda said the “mushrooming” of 128 political parties and a record 23 presidential candidates set to participate in the elections was proof of the transparent democratic space unprecedented since Zimbabwe’s Independence in 1980.

“In the same vein, media coverage for the electoral process has been pervasive and inclusive of all political parties.”

He said the ZEC had since produced copies of the updated voters’ roll for inspection by the public and political parties.

“It should also be noted that the current elections will be conducted using a biometric voters’ roll similar to the Namibian experience.

Noting that the President Mnangagwa had categorically stated on numerous occasions that the country would conduct free, transparent, fair and credible elections, Adv Mudenda said all political parties had been campaigning freely in the country.

“A number of countries and international organisations such as the Commonwealth, the African Union, the European Union, the Swedish government, the National Democratic Institute (NDI) and Republican International Institute have sent teams to pre-assess the prevailing electoral environment before rolling out their observation teams.”

He said the teams had concluded that the electoral environment was conducive to holding free, fair, transparent and possibly credible elections.

“To bolster this scenario . . . all the 23 Presidential candidates signed a peace pledge on 26th June 2018 to the effect that all these candidates must be advocates for peaceful elections before, during and after their conclusion.”

Additionally, he said, electoral courts had been established in the country’s 10 provinces to deal with all electoral breaches expeditiously.

Meanwhile, the President of SADC PF will no longer have to hit the table with his or her clenched fist to call for order.

This comes after Mozambique donated a hammer to him on Thursday.

Life was a struggle in Zimbabwe. Moving to Nunavut gave me hope