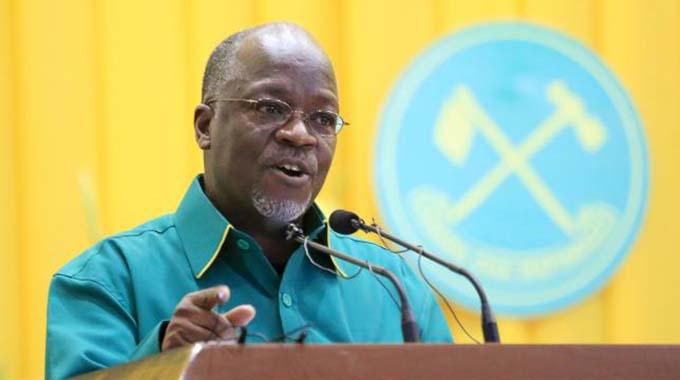 Speaking at a press conference here yesterday, the East African country’s fifth president after independence from Britain on December 9, 1961, said the rains that coincided with President Mnangagwa’s visit portended victory for the Zanu-PF candidate.

President Mnangagwa, said President Magufuli, had a “human heart, a patriotic heart and the spirit of love”.

“Zimbabwe,” he added, “will show you back the love by overwhelming voting for you (in the next elections).”

President Magufuli thanked President Mnangagwa for taking time off his busy schedule, especially at a time when Zimbabwe was in the middle of preparations for the forthcoming elections, to accede to a request to visit East Africa’s second-biggest economy.

This, he said, was “sufficient indication of the cooperation between the two countries”.

President Magufuli indicated that his guest, who was one of the pioneers of the military camp at Bagamoyo in Tanzania in the early 1960s, will visit the historic place today.

Zimbabwe and Tanzania are inextricably linked as the latter used to provide political, material and social support to Southern African countries in their fight for independence.

The East African country notably hosted the OAU (now AU) Liberation Committee, which supported liberation movements during the 30-year period from 1963 to 1994.

President Mnangagwa is in Tanzania for a two-day State visit which ends today.

Former secretary-general of the ruling Chama Cha Mapinduzi (CCM) Cde Abdulrahman Kinana delivered the invitation when he met President Mnangagwa at his Munhumutapa offices on May 23.

He has, however, since resigned as the head of the secretariat of the Tanzanian ruling party.

A Tanzanian delegation to Harare earlier in the year was part of the pre-election observation team led by Cde Ngemela Lubinga from Tanzania’s ruling party CCM.

During their four-day visit, the delegation met the various political parties.

President Magufuli, who was unanimously elected as chairperson of CCM, recently commended Zimbabwe for the peaceful transition that took place in November last  year.

He was elected President in October 2015 after garnering 58 percent of the vote in elections that were largely considered to be the fiercest to have been faced by the party in its 54 years in power.