FOURTEEN leaders and members of the Amalgamated Rural Teachers Union of Zimbabwe (ARTUZ) have been set free after a Zimbabwean court threw out disorderly conduct charges brought against the labour unionists and ruled that they did not commit an offence by staging an anti-government demonstration against poor salaries and working conditions. 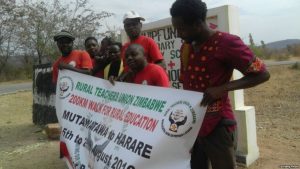 The ARTUZ leaders and members had been hauled before the courts after they were arrested on Tuesday 18 December 2018 and charged with disorderly conduct in contravention of Section 41(a) of the Criminal Law (Codification and Reform) Act for allegedly blocking a road in Ruwa while holding and waving placards during an anti-government protest against poor remuneration dubbed “Salary Caravan”.

But Harare Magistrate Victoria Mashamba on Wednesday 19 December 2018 set free the ARTUZ leaders and members after ruling that the unionists had not committed an offence in staging an anti-government protest against the country’s worsening economic crisis as they were simply exercising their constitutional rights as enshrined in the Constitution.

The unionists’ lawyers Tinotenda Shoko and Kossam Ncube of Zimbabwe Lawyers for Human Rights had challenged the placement on remand of their clients arguing that they had not committed any offence by waving placards and singing songs when they were arrested
while protesting because they are a registered trade union which is exempted from notifying the regulatory authority (ZRP) as provided under the punitive provisions of the Public Order and Security Act.