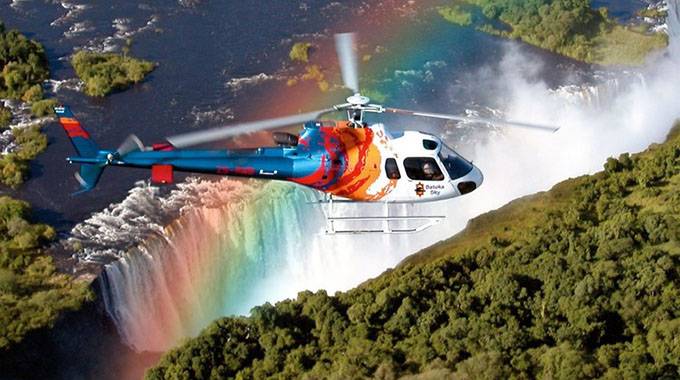 Zimbabwe is targeting a seven-fold growth in tourism export earnings

Martin Kadzere and Golden Sibanda
Zimbabwe’s tourism sector has maintained the buoyancy witnessed prior to the holding of the July 30 harmonised polls, an unusual trend compared to events that characterised previous election periods, a top tourism industry official said.

While regional and international observers stationed in Zimbabwe in the period leading to, during and after the elections certified the polls free, fair and credible, after President Mnangagwa’s victory, the main opposition has disputed the results.

“In as much as this has been an election year — and given our history — we anticipated a decline in revenue but what happened is exactly the opposite,” Safari Operators Association of Zimbabwe Mr Emmanuel Fundira said in interview.

“It confirms that externally, we are being given a heads-up in terms of endorsement,” the former Zimbabwe Council for Tourism president said.

Mr Fundira is also one of Zimbabwe’s prominent and leading Safari industry operators.

Zimbabwe held the watershed harmonised elections — won by the ruling ZANU-PF party and its presidential candidate President Mnangagwa on July 30 — which most observers described as free and fair.

The incumbent, President Mnangagwa romped to victory in the presidential poll with 50,8 percent of the vote ahead of his nearest rival Nelson Chamisa of the MDC Alliance’s 44,3 percent.

President Mnangagwa’s ZANU-PF party also walked away with just over two thirds majority after netting 145 seats out of a total contestable National Assembly seats of 210 with MDC Alliance winning 63.

Opposition leader Nelson Chamisa of MDC Alliance has since filed a petition with the Constitutional Court contesting the outcome of the presidential result and some of the parliamentary seats. The hearing of the matter is expected to start this morning.

Mr Fundira said the country’s tourism industry was expected to surpass the revenue targets projected for this year.

Zimbabwe is targeting a seven-fold growth in tourism export earnings — to as much as $7 billion by 2030 — to be achieved through effective marketing, product development and facilitation and access, according to projections contained in a Government strategy document that has been crafted by Government.

“In particular, revenues from safari operators are now expected to surpass the 30 percent growth we had projected last year,” he said.

“We have done exceptionally well, even before we reached our peak period which we are about to enter.”

Early this month, an online publications Daily Southern and East African Tourism update said despite protests that broke out on August 1, 2018 in Harare,  it was “business as usual”, in tourism as the industry has remained largely unaffected.

“The scenes of unrest out of Zimbabwe on Wednesday do not reflect the entire country; they were concentrated in Harare’s CBD,” said Ross Kennedy, Africa Albida’s CEO.

Tourist arrivals went up 15 percent in the first quarter of this year to 554 417 from 480 510 in the same period last year. Tourism receipts grew 20 percent during the period under review to $190 million compared to the 2017 first quarter.