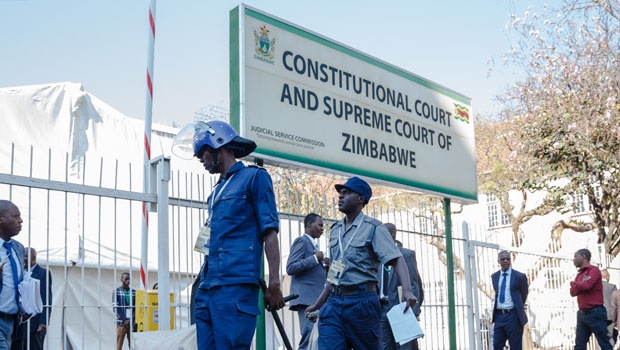 ShareIcon
The law in Zimbabwe allows voters to be assisted by people of their choice and there is proof of coercion, says Uriri

ShareIcon
It is our prayer that this case be dismissed because at the end of this hearing no one knows how many votes should be subtracted from the first respondent as no proper grounds have been established by the applicant, say Magwaliba

ShareIcon
Magwaliba: The application was not served within the proper period of 7 days as stipulated by the law. Lodging an application and serving of papers to respondents should be done within those 7 days but the applicant chooses to blame the sheriff

ShareIcon
Allegations of bribery referred to in the heads of arguments have not been established, says Magwaliba

ShareIcon
Dr Outumba is not a neutral expert whose evidence should be disregarded, says Magwaliba

ShareIcon
No one knows whether 40 000 teachers were disenfranchised of their rights to vote as no one approached the courts to complain, says Magwaliba

ShareIcon
The applicant does not say how many votes he lost as a result of the design of the ballot papers, says Magwaliba

ShareIcon
Magwaliba: The applicant does not deny that all parties were given sample ballots during multi-party liaison committee meetings

ShareIcon
The applicant did not audit the voters roll, adds Magwaliba

ShareIcon
The electoral playing field was very even, says Magwaliba

ShareIcon
ZEC denies that it gave any phone numbers to the ruling party and first respondent, says Magwaliba

ShareIcon
No evidence led by applicant to suggest that some unnamed traditional leaders marshaled villagers to polling stations, says Magwaliba

ShareIcon
The applicant did not write any single letter to the state media complaining of a skewed media coverage, says Magwaliba

ShareIcon
The only admissible figures are those that have been produced by ZEC which translate to 50.67% in favour of President Mnangagwa, says Uriri before deferring proceedings to his colleague Magwaliba

ShareIcon
You need direct evidence to set aside the poll results, say Uriri

ShareIcon
The voter turnout as declared by ZEC was 85.1% and that accounts for the 700 000 votes alluded to by the applicant, argues Uriri

ShareIcon
Uriri: The integrity of Chamisa’s figures cannot be vouched for and they have been created as they did not originate from the official keeper of those figures

ShareIcon
Uriri: What materials did he use and where did he get those materials

ShareIcon
Where does the applicant get the figures when he has not approached the keepers of those figures and source documents, says Uriri

ShareIcon
Uriri: The evidence of electoral residue is still available

ShareIcon
Chamisa should have applied to the electoral court to unseal the election residue within 48 hours as stipulated by the law, says Uriri

ShareIcon
The applicant must bring to court the object that is alleged to be primary source of the allegations of voter fraud, says Uriri

ShareIcon
Court session has resumed and Mnangagwa’s lawyer Lewis Uriri takes to the stand to oppose the Chamisa submissions.

ShareIcon
Policemen stand guard outside the courthouse in Harare, where the Zimbabwe Constitutional Court is hearing a petition by the main opposition seeking to overturn the results of the July 30 presidential elections. (Picture: AFP) 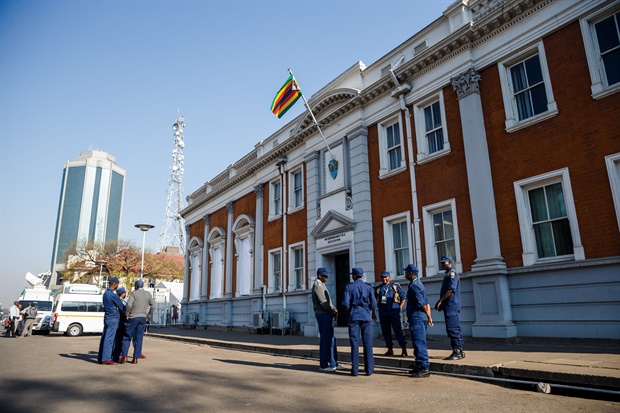 Chamisa’s lawyers in court said they had not been allowed to bring in electronic gadgets, either.

According to Veritas, a legal think tank based in Harare, the court can declare a winner or invalidate the election and call for a fresh election or make any other order it considers “just and appropriate.”

If the court upholds Mnangagwa’s win the inauguration would take place within 48 hours. This is not the first time the opposition has challenged election results in court.

Following the 2013 presidential election, then main opposition leader Morgan Tsvangirai filed a challenge but later withdrew it, claiming he would not get a fair hearing. The court declined his withdrawal and proceeded to rule on the case in favor of Mugabe. – AP

Mnangagwa and the electoral commission argue the opposition’s application should be dismissed on a technicality, saying it was filed too late and that papers were not properly served on respondents.

In his affidavit, Mnangagwa argues the court should not hear Chamisa’a application because he “scandalised” the court by claiming during political rallies that the judiciary was biased toward the ruling party, Zanu-PF.

The case was being televised live by the state broadcaster, the Zimbabwe Broadcasting Corporation, but the courts ruled that the proceedings could not be livestreamed on social media.

Journalists and others accredited by the court were following proceedings from a giant television screen on the court premises, but they were not permitted to carry mobile phones or laptops. – AP

Chamisa’s challenge claims the electoral commission bumped up Mnangagwa’s figures through double counts and the creation of “ghost” polling stations.

It also alleges that some polling stations recorded more voters than those registered to vote.

“It’s like a kid was playing with the figures,” a lawyer for the opposition, Thabani Mpofu, told the court. He alleged that 16 polling stations had identical results and that “massive doctoring” took place.

Chief Justice Luke Malaba, however, pressed the opposition for the original election results forms to back up their allegations: “We cannot act on generalities”. – AP

ShareIcon
Court adjourns for lunch. Proceedings will resume in 40 minutes.

ShareIcon
The sheriff had enough time to effect service on the first respondent but decided not to do anything and therefore the applicant cannot be penalised for someone’s dereliction of duty, says Mpofu

Zimbabwe’s opposition argued in the country’s top court Wednesday that the presidential election results must be thrown out, alleging that only “massive doctoring” of the vote had kept Emmerson Mnangagwa in office.

Lawyers for the Movement for Democratic Change (MDC) launched a blistering attack on the ruling Zanu-PF party and the election commission over the July 30 ballot – Zimbabwe’s first election since the ousting of Robert Mugabe last year.

“There is a massive cover-up. There has been a massive doctoring of evidence,” Thabani Mpofu, representing the MDC, told the court.

Mnangagwa, Mugabe’s former ally, won the election with 50.8% of the vote – just enough to meet the 50% threshold needed to avoid a run-off against MDC leader Nelson Chamisa, who scored 44.3%.

He argued that irregularities wiped out the narrow margin by which Mnangagwa had avoided a second-round vote.

“A run-off is unavoidable. For now, the election must be set aside,” Mpofu said, adding that “we have a false ZEC (Zimbabwe Electoral Commission). We have a lying ZEC.” – AFP

ShareIcon
“If we were to say the first respondent is the elected president, how many votes did he garner?,” Mpofu asks

ShareIcon
ZEC violated the constitution and the Electoral Act by denying some Zimbabweans their right to vote, that effectively means ZEC threw President Mnangagwa under the bus, says Mpofu

The applicant had no reason to cause the opening of ballot boxes for a recount and is not obliged to do so, says Mpofu, especially when there is evidence placed before the court that figures released by ZEC were not genuine and consequently Mnangagwa did not win the election.

In that case there is no need for primary evidence

Mpofu reads an affidavit by one of the polling agents who says she was chased away from the polling station by the presiding officer and was only allowed to return after counting had been done and was asked to sign the V11 forms and she refused.

ShareIcon
This is evidence of manipulation after the process by ZEC, says Mpofu

ShareIcon
Mpofu says there had been a massive cover up