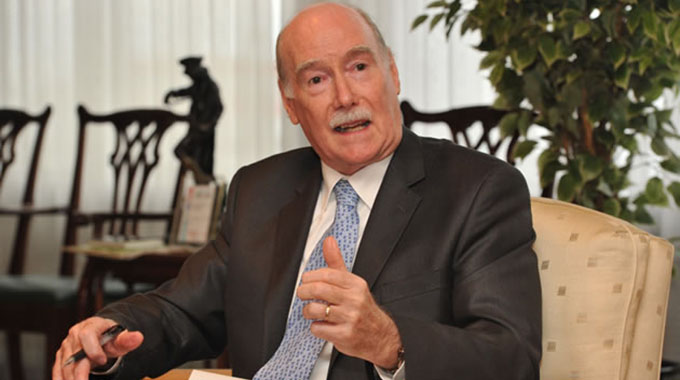 Enacy Mapakame in VICTORIA FALLS
Government is working on a new short-term economic blueprint that is expected to help stabilise the economy as it moves towards achieving the middle income status by 2030.

The short-term economic plan is set to provide the basis upon which the new Government led by President Emmerson Mnangagwa which got a fresh mandate from the electorate recently, will work, and move the country forward.

Speaking at the Standards Association of Zimbabwe (SAZ) Business Leaders Conference 2018 in Victoria Falls yesterday, Permanent Secretary in the Office of the President and Cabinet, Ambassador Stuart Comberbach, said the draft had already been distributed to key stakeholders for consideration.

Although he could not divulge more details on the policy document, Ambassador Comberbach said the policy should provide stepping stones for economic stability.

The two-year plan will be followed by two other five-year national development plans that are expected to usher the country into 2030, by which time Zimbabwe is targeting to be a middle-income economy and targets a Gross Domestic Product (GDP) of over $65 billion.

On average, countries with per capita gross national incomes of between $996 and $12 195 fall under this category.

Said Ambassador Comberbach: “There is a short-term plan that Government has been working on for economic stabilisation. This is a two year plan, which is now ready in draft form and will obviously go through consideration by the new Cabinet and see to what extent it meets expectations.

“It should guide the economy for the next two years and there after we will have two five year national development plans. The first one will be for 2021 to 2025 and another in 2016 to 2030, leading us into the vision 2030 middle income economy.

“I cannot provide further details, but I have already received my draft copy.”

The new short-term plan comes at a time the Zimbabwe Agenda for Sustainable Economic Transformation Agenda (Zim-Asset) life span is expiring at the end of year.

Zim-Asset identified among others, infrastructure, value addition and beneficiation, as enablers to economic growth and sought to address some of the key challenges the economy faced, such as unemployment.

Ambassador Comberbach said there was political will from the new Government, which should see the economy growing.

Parastatals have been performing dismally, with 38 out of 93 State-owned firms audited in 2016 incurring a combined $270 million loss owing to weak corporate governance practices and ineffective control mechanisms.