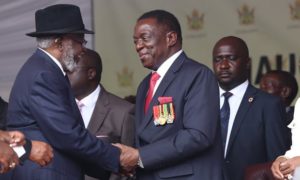 Zimbabwe’s new president has announced a three-month amnesty for the return of public funds hidden abroad by individuals and companies.

When the amnesty expires, the government will arrest and prosecute those who have failed to comply with the directive, Emmerson Mnangagwa said in a statement on Tuesday.

Corruption was prolific under Robert Mugabe, who resigned last week after 37 years in power.

Mnangagwa, who was sworn in as president on Friday, told offenders to take advantage of the amnesty “to avoid the pain and ignominy of being visited by the long arm of the law”.

The Zanu-PF party stalwart is under pressure to move swiftly to tackle poor administration and an economy close to collapse.

The amnesty period will run from 1 December.

“Upon expiry of the three-month window, the government will proceed to effect arrest of all those who would not have complied with this directive, and will ensure that they are prosecuted in terms of the country’s laws,” Mnangagwa said in a statement.

Mugabe’s long rule left Zimbabwe with a worthless currency, massive debts and crumbling infrastructure. Unemployment is thought to be as high as 80% and corruption, ranging from the massive looting of state coffers to petty extortion by officials, is one of the major grievances that fuelled discontent under the ageing autocrat.

Mugabe’s former finance minister Ignatius Chombo has been detained on graft charges. He appeared at a magistrates court over the weekend in leg irons.

On Tuesday, Mnangagwa told heads of ministries he was putting together a “leaner” government in which some departments would be merged to enhance efficiency.

Although the bloated civil service consumes almost the entire national budget, only workers of retirement age will be laid off.

“My government will have no tolerance for bureaucratic slothfulness, which is quick to brandish procedures as an excuse for stalling service delivery to citizens, investors and other stakeholders,” Mnangagwa said. “The huge weight of expectations from the populace … [means we] should endeavour to adopt a high-performance work ethic.”

Some analysts expect Zimbabwe to ask for help from lenders such as the International Monetary Fund or World Bank. Any funds from either would imply drastic cuts to the numbers of civil servants and other painful measures.

A new cabinet is expected to be announced later this week. Opposition leaders hope Mnangagwa will opt to include them in a broad-based government. Some observers believe he is more likely to favour well-known figures who have long held senior positions within the ruling Zanu-PF.

Such a move will underline how the ousting of Mugabe was more of a redistribution of power and resources within the existing political elite, rather than a popular revolution leading to major changes.

The military takeover that allowed Mnangagwa to return to Zimbabwe from neighbouring South Africa, where he was based after being sacked as vice-president by Mugabe on 6 November, was triggered by fears that Grace Mugabe, the former president’s wife, was close to winning a bitter internal battle for power.

She was the centre of a group of ambitious Zanu-PF politicians who are being systematically stripped of power and influence by Mnangagwa and his supporters within the party.

Many of the most senior members of the defeated faction are overseas or detained in Zimbabwe, while the whereabouts of others is unknown.

Zanu-PF dismissed five members of parliament on Tuesday, all linked to the G40 group that supported Grace Mugabe.

They included Chombo and Jonathan Moyo, the former higher education minister who was seen as one of its most important members.