Zimbabwe crisis: What you need to know

Zimbabwe’s anti-government protest strike has entered day three with streets, particularly in Harare, said to be deserted. Here is what you need to know.

Source: Zimbabwe crisis: What you need to know | News24 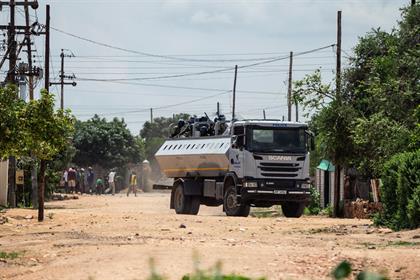 Here is what you need to know.

Zimbabwean President Emmerson Mnangagwa announces a sharp increase in fuel prices in a measure to improve supplies as the country struggles with its worst petrol shortage in a decade.

In an address on state TV, Mnangagwa says the prices of petrol and diesel will more than double to tackle a shortfall caused by increased fuel usage and illegal trading.

Mnangagwa, who took over from long-time leader Robert Mugabe and won a disputed election in July, says petrol prices will rise to $3.31 from $1.24 a litre and diesel prices to $3.11 from $1.36 a litre.

The announcement comes after fuel shortages which began in October last year worsened in recent weeks with motorists sometimes spending nights in queues at fuel pumps stretching for kilometres.

Zimbabweans react with outrage to Mnangagwa’s announcement, saying the move would worsen an already difficult economic situation and trigger protests and strikes.

The Zimbabwe Congress of Trade Unions (ZCTU) says the government has demonstrated a lack of empathy for the already overburdened poor.

“The government has officially declared its anti-worker, anti-poor and anti-people ideological position.

“Workers’ salaries have been reduced to nothing and our suffering elevated to another level,” ZCTU says in a statement.

Zimbabweans – mainly in Harare and Bulawayo – take to the streets. They burn tyres and use rocks to barricade roads and block buses from taking passengers to work. 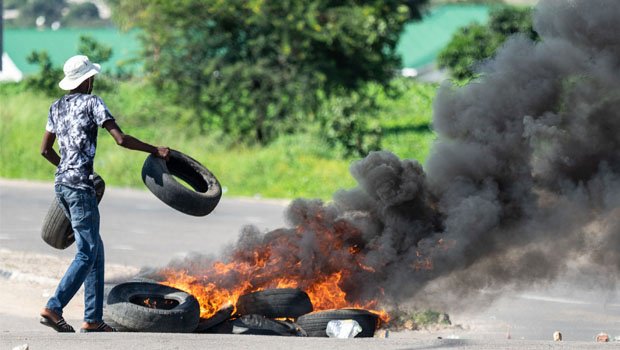 Shops are looted and property is burnt.

Businesses, schools and banks shut down as riot police patrol the streets.

Government accuses the opposition and civil society organisations of being behind the protests, with the country’s National Security Minister Owen Ncube saying that more than 200 people have been arrested in connection with the violence.

Government spokesperson Nick Mangwana says the opposition, civic groups and foreign organisations are trying to use the fuel shortage and price increases to topple the government.

Zimbabwe enters the second day of protests. There are reports that the headquarters of the Movement for Democratic Change (MDC) have been vandalised. It’s not clear who is behind the attack.

The military is deployed and uses a helicopter to fire tear gas at demonstrators in the capital. There is a widespread military operation in major cities, with claims that soldiers are beating up people as they move from house to house, kicking down doors and dragging people out of their homes.

@UN Zimbabwe needs you now! #ZimbabweShutDown #shutdownZimbabwe people are being shot by soldiers in their homes.???????? pic.twitter.com/NkiAfAFor6

Government shuts down the internet to prevent citizens from communicating and organising more protests. Social media platforms such as Facebook, Twitter and WhatsApp are disabled.

Businesses and schools remain shut and public transport is grounded in most of the country despite government assurances that security would be provided.

“Threats to overthrow a constitutionally elected government by force and install an unelected person as president of Zimbabwe will be thwarted,” she says.

Tensions continue. There are widespread reports of violence as the country faces a third day of protests.

The country’s largest telecom company, Econet, has sent text messages to customers saying it has been forced by the government to shut down internet service.