The Department of International Relations and Cooperation says it is confident the measures being taken by the Zimbabwean government will help end a protests over fuel prices. 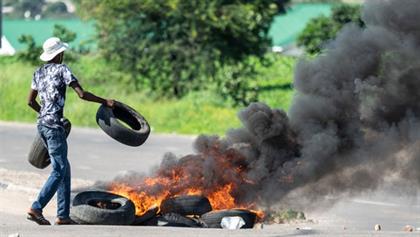 The Department of International Relations and Cooperation (Dirco) is “confident that the measures being taken by the Zimbabwean government will resolve the situation” as protests over fuel prices continue.

Consultations were taking place between diplomats and the SA government was “monitoring the situation”, department spokesperson Ndivhuwo Mabaya said in a statement on Tuesday.

Earlier on Tuesday, a Zimbabwean military helicopter fired tear gas at demonstrators in the capital on the second day of deadly protests, AP reported.

The increase resulted in the country’s biggest protest since last year’s post-election violence.

Social media platforms have been disabled, AP reported, while businesses and schools have been shut down.

Public transport also came to a standstill in most parts of the country.

Five people were killed in Monday’s protests during which security forces opened fire on crowds, according to the Zimbabwe Association of Doctors for Human Rights.

Another human rights group said 26 people suffered gunshot wounds and that some were afraid to go to hospitals for fear of arrest or assault, AP reported.

Meanwhile, the EFF in a statement said it “extends its solidarity” with the people of Zimbabwe.

“We call on the government of Zimbabwe to respond to these demonstrations with restraint. We particularly condemn the unleashing of military on citizens who are exercising their right to protest,” the party said.

“A democratic government knows too well that militaries are not entities used to respond to protesting, armless, and defenseless citizens. To unleash the military is to treat citizens as enemies of the state, who must be met with excessive violence, force and death, as militaries are death driven, only to be deployed to those who are armed and sworn enemies of the people.”

Militaries should “never ever be used against protests and civil defiance demonstrations actions,” it said.

“The progressive international community celebrated the fall of [former president Robert] Mugabe, with the hope that the era of human rights abuse, associated with his reign in Zimbabwe, will come to an end. President [Emmerson] Mnangagwa is therefore consistent with the Mugabe administration in violation of the citizen’s right to protest and civil disobedience.”

‘Scrap US$50 duty on imported cellphones’