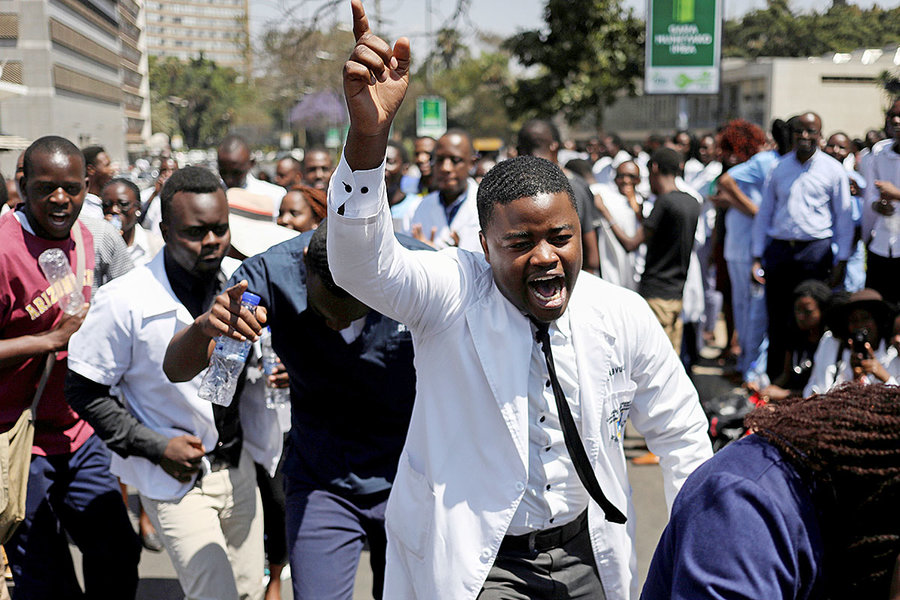 Doctors sing and hold placards during a protest over the disappearance of the leader of their union in Harare, Zimbabwe, Sept. 16, 2019. The leader, Peter Magombeyi, was found alive several days later. His supporters say he was abducted and tortured by security forces.

WHY WE WROTE THIS

Two years ago this month, longtime leader Robert Mugabe was pushed out of power, sparking fervent hopes for change. Today’s strike is dangerous, for doctors and patients alike – but shows a refusal to let go of that hope.

Doctors sing and hold placards during a protest over the disappearance of the leader of their union in Harare, Zimbabwe, Sept. 16, 2019. The leader, Peter Magombeyi, was found alive several days later. His supporters say he was abducted and tortured by security forces.

For months Dr. Magara had watched as his salary halved in value, and then halved again, as inflation in Zimbabwe charged into the triple digits.

So in early September, he joined hundreds of other junior doctors working in public hospitals in Zimbabwe and went on strike.

“Yes, it’s a calling, but without [the salary] it takes to do what you have to do, [that calling] is nothing,” says Dr. Magara, standing at the main entrance to Parirenyatwa Hospital, the country’s largest.

The doctors’ predicament looks a lot like their country’s. Inflation in Zimbabwe recently topped 300%, higher than any country in the world except Venezuela. The country is facing shortages of hard currency, fuel, medicine, and basic foods like bread. Meanwhile hope for political change, which had been recharged by the resignation of Robert Mugabe in November 2017, has gone flat.

But in that climate, Zimbabwe’s young doctors are testing a risky proposition: that change might still be possible if you ask for it loudly enough.

Their strike began in early September, when runaway inflation pushed the value of junior doctors’ wages to about $100 per month. The doctors – who are second-year interns – say they didn’t have the savings to subsidize the cost of working. Many were also deeply frustrated by widespread shortages of medicines and other basic supplies like needles, rubber gloves, and running water.

“It’s not only about the low salaries,” says Tapiwa Chagonda, an associate professor of sociology at the University of Johannesburg who studies how Zimbabwean workers survive in times of economic crisis. It’s also a matter of dignity for both doctors and patients. “They’ve signed up to the Hippocratic oath” to do no harm. “But there’s no working equipment, there aren’t basic drugs. In those conditions, how do you even begin to assist your patients?” he says.

On a recent Saturday outside Parirenyatwa – which was named for the first black Zimbabwean to qualify as a medical doctor – the parking lots were empty and still. Without its junior doctors, the hospital was running on a skeleton staff. Nurses and a few doctors tended to emergency cases. But most arrivals had to be turned away, or find their own way to receive treatment in the hospital’s ghostly wards.

Last month, Tendai Liwombo was one of them. When she found herself suddenly doubled over in pain one morning, her husband Prince Masawi rushed her to Parirenyatwa.

A nurse suspected she had an ectopic pregnancy, a life-threatening condition. From there, Ms. Liwombo spent hours bouncing between public and private hospitals across the city as her husband searched frantically – first for a facility with a working ultrasound machine, and then for a private anesthesiologist for the surgery.

When he found one, Mr. Masawi says, the man demanded $450, many times his monthly salary as a security guard. Frantic that he would lose his wife, Mr. Maswai thrust his cellphone into the man’s hand, begging him to take it as payment. At last, the doctor agreed to a payment of $50.

“The government should do something [to end the strike],” Ms. Liwombo says. She says she sympathizes with the doctors, whom she knows are living in the same harsh situation as she is, and doesn’t believe it is their responsibility to go back to work in these conditions. A month after her surgery, she is still in intense pain, and fears what will happen if she needs further medical care. “People are dying. Any further delay to my situation and it could have been a different story today.”

Stories like these deeply trouble Dr. Magara, who says he dreamed of becoming a doctor since childhood “to save lives and to play a humanitarian role in society.” He knows his strike puts his patients’ lives on the line. But he reached a point, he says, where he could not afford to continue showing up to work.

The strike itself has also been dangerous. In September, Peter Magombeyi, one of the strike’s leaders, was abducted and tortured. Many suspect government involvement, though the government blames a “third force” wanting to destabilize Zimbabwe.

The strike, indeed, is a consequence of the country’s messy political transition.

When Emmerson Mnangagwa became president in November 2017 after ousting Mr. Mugabe, who had ruled the country since 1980, he vowed Zimbabwe was now “open for business.” On visits to foreign countries, and at the Davos World Economic Forum, he promised investors and donors a new dawn after decades of oppression and financial mismanagement under Mr. Mugabe.

Instead, his government violently put down protests, using the army to break up demonstrations and shooting live ammunition at protesters. This did little to win the confidence of the governments and companies Mr. Mnangagwa hoped to woo, and the country’s already-weak economy continued to backslide. Earlier this year, the country uncoupled its currency from the U.S. dollar, and inflation skyrocketed. The economy is now at its worst point since 2008, when annual inflation hit 89.7 sextillion percent.

As the value of their salaries dwindled, young doctors like Dr. Magara began hustling for other sources of revenue. Some became farmers. Others begged money off parents and relatives abroad to pay rent. Still others began seeing patients in private clinics, where they could charge enough to make up for their lost wages.

“I had 100% confidence in Mnangagwa’s government when he took over in 2017, but it dwindled over time,” says Dr. Magara, who is currently living on money from family members.

Although the strike has so far failed to achieve its aims, it has drawn renewed international attention to Zimbabwe’s economic collapse. In late September, a global health summit in Boston named Zimbabwean first lady Auxillia Mnangagwa an “honorary ambassador” who would collaborate on “reducing healthcare disparities.” But a swift outcry, including from several former U.S. diplomats, quickly led the organization to distance itself from Ms. Mnangagwa. The honor, the diplomats wrote, gave tacit support to “an increasingly corrupt and abusive administration in which tolerance for dissent is nonexistent and democratic rights are violently denied.”

Dr. Magara continues to hope the government will eventually come around to the doctors’ demands, which include a 400% raise and salaries pegged to the dollar. Strikers have rejected the government’s offer to boost salaries by 60%, and there is little indication they would offer more. More than 400 doctors have been dismissed, and the deputy minister of information has tweeted that the “money mongering” strikers will be blacklisted.

“This is sad for me and my colleagues,” says Dr. Magara. “There is a possibility that I might choose to jump off the bus and do something else [professionally]. But I have my patients at heart.”