Lets not delude ourselves – ordinary Zimbabweans played no role in Mugabe removal!

It was purely a coup d’etat!

Source: Lets not delude ourselves – ordinary Zimbabweans played no role in Mugabe removal! – The Zimbabwean 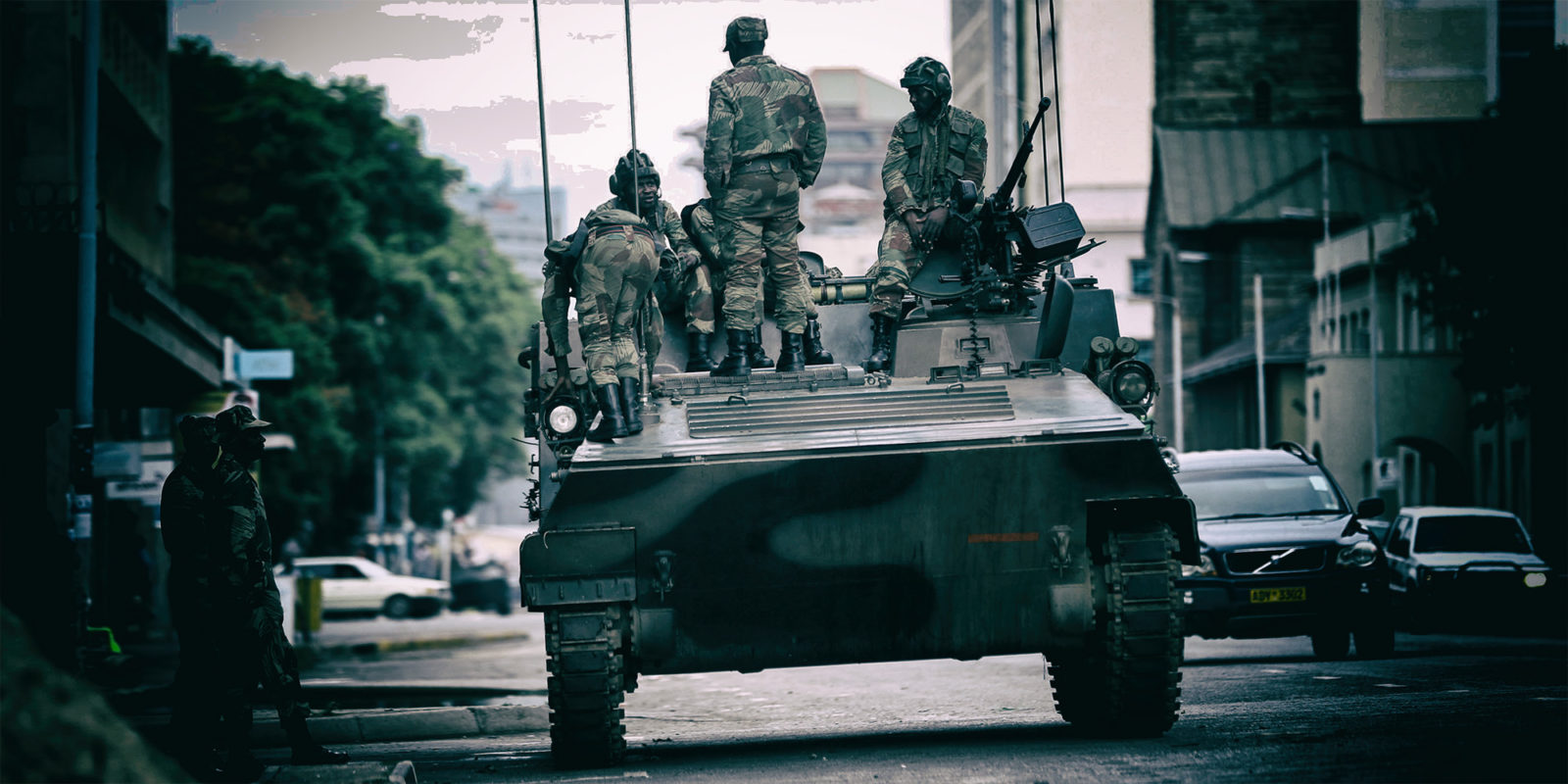 Soldiers stand on and next to an armoured vehicle parked in the central district of Harare, Zimbabwe, 16 November 2017. EPA-EFE/AARON

As Zimbabwe remembers the second anniversary of the ‘resignation’ of long-time dictator Robert Gabriel Mugabe on 21 November 2017 – marking the end of his 37 year reign of terror – it is shocking how easily and quickly history has been distorted in order to fit a deceptive narrative that seeks to portray events that captured the entire world for those two weeks, as a result of a mass people’s revolution.

What a blatant lie!

The events of November 2017 in Zimbabwe were nothing in the mould of the so-called ‘Arab Spring’ wave that swept through north Africa and parts of the Middle East in 2011 – since these were certainly people-driven revolutions, that led to the removal of iron-fisted despots, which is in stark contrast to the military coup d’etat that was witnessed the southern African country.

History is a critical and pivotal part of any person, family, society, tribe, race, religion, and nation – and as such, is a foundation that should never be tampered with, or altered, to serve a narrow and myopic self-serving agenda. Thus, any history’s authenticity should be guided jealously.

This should also apply to the events that shook the nation of Zimbabwe – and the world – in November 2017, as these were a far cry from the bastardized narrative being peddled by mostly regime agents and, unfortunately, some amongst the ordinary people.

History is usually based on irrefutable facts, and those who deliberately seek to misrepresent such facts are those with a dubious and sinister motive – mostly for self-serving and perverted causes.

Such perfectly applies to Zimbabwean authorities who have over the past two years sought to disguise an unquestionable military coup d’etat as a popular revolution – possibly in an effort to attain both local and international acceptance for something that is generally frowned upon.

For a more precise and logical understanding of what truly transpired in 2017, there is no better and clearer evidence that a timeline of events of those critical two weeks in November.

As is now common knowledge, there had been openly vicious, bruising and even brutal factional fighting within the ruling ZANU PF for several years (all vying to replace the ailing and nonagenarian leader) before the coup d’etat – that witnessed the unceremonious sacking of vice president Joice Teurai Ropa Mujuru on 9 December 2014 (as well as her Gamatox faction allies),  just before the crucial December party congress, which led to the ascendency of Emmerson Dambudzo Mnangagwa as her successor – at the instigation of the then first lady Grace.

Then Grace upped the ante, turning against her former ally, Mnangagwa, culminating in the concerted purging of the vice president’s Lacoste faction allies (who were generally of the Karanga tribe, as well as veterans of the liberation struggle) – the most brazenly crushing events occurring in August 2017, with clashes between the police (believed to be aligned to Grace and her G40 faction) and soldiers (aligned to Mnangagwa) in the capital Harare.

On the 12th of the same month, Mnangagwa was allegedly poisoned during a ZANU PF Presidential Youth Interface Rally in Gwanda, widely suspected to have been the result of the factional fighting – although the whole poisoning claim was later reportedly disproved by a senior intelligence official, who claimed that it had been faked.

Nonetheless, these events only served to intensify the acrimonious relationship between the two factions – characterised by frequent openly-traded insults, albeit, being mainly one-sided (Grace being the perpetrator) – the climax being the popular booing of the former First Lady at another rally in Bulawayo’s White City Stadium on 4 November – something that thoroughly enraged Mugabe leading to his sacking his deputy, and long-time protégé, two days later.

Henceforth, this is where the timeline of events has to be unequivocally comprehended and appreciated – as this is where those who have sought to distort history have trampled with the facts.

On 8 November, the sacked Mnangagwa fled the country into South Africa, after which a statement, allegedly penned by him, was issued to the effect that he would soon return to take over the reigns of power.

A few days later, on 13 November, the then commander of the Zimbabwe Defence Forces (ZDF) Constatino Guveya Chiwenga – flanked by other military generals – appeared in international media (as the local state broadcaster, true to its nature, serving only those currently in power, had ignored the press briefing) – warning Mugabe to end purges in the ruling ZANU PF, saying that the military could intervene to stop all those bent on hijacking the revolution and causing instability in the party.

At this juncture, it is most important to note that this statement was very telling of the true intentions of the impeding coup d’etat – it had everything to do with ZANU PF internal politics, and absolutely nothing to do with the welfare and wellbeing of the ordinary people of Zimbabwe.

Only 24 hours after issuing that grave statement, on 14 November military tanks were reportedly spotted rolling into the capital Harare – a strangely unusual occurrence, that swiftly raised suspicions that, true to the generals’ warning, a military coup d’etat was underway.

Indeed, this suspicion was confirmed early the following morning, when Zimbabweans, and the world, woke up only to be greeted by images of the state broadcaster under the control of the military – repeatedly beaming a statement to the effect that the military had decided to intervene by “targeting criminals around the then president who were committing crimes that were causing social and economic suffering in the country in order to bring them to justice”.

The military broadcast also sought to assure viewers that the “head of state, and commander-in-chief of the Zimbabwe Defence Forces, President Robert Gabriel Mugabe and his family were safe”.

Of course, the tone of the military intervention had strangely suddenly changed from only 48 hours earlier, when the stated aim of a possible military intevention had been purely as a result of ‘purging, and instability’ within ZANU PF, by forces ‘bent on hijacking the revolution’ – as witnessed by previous months’ mass sacking of mostly veterans of the liberation struggle.

This also explains the operational name given to the military intervention – ‘Operation Restore Legacy – since the main objective was to resist the purging the veterans of the liberation struggle, and the ‘danger’ of their legacy being wiped away.

As such, in stark contrast to the statement issued on 15 November on the state broadcaster – which suddenly sought to broaden the intevention as a national cause – the real motivate for the coup d’etat was purely internal ZANU PF factional fighting.

On this same day, international media said that the then South African president Jacob Zuma had spoken to Mugabe, who confirmed that he was under house arrest.

Here, another key note needs to be highlighted – the ordinary people of Zimbabwe were not involved at all. They were merely spectators – watching, with uncertainty, mainly via international news, as there was a virtual blackout of these unfolding events in all local state media.

In other words, as the coup d’etat was effectively now well underway, Zimbabwean citizenry had played absolutely no role.

The subsequent events – most notably, the 18 November liberation war veterans’ call for mass marches in Harare to demand for Mugabe’s resignation, had no significant impact on events, as the then president was clearly already under siege, and his future squarely in the military’s hands – despite people heeding the call, and turning out in their thousands.

These mass marches were clearly formulated by those behind the coup d’etat to deceive the international community into believing that the military intervention was solely an answer to the people’s demands – however, the chronology had been thoroughly messed up, as events were now well ahead of the purported ‘voice of the people’.

It was most shameful and unfortunate that so many people – including the opposition Movement for Democratic Change (MDC) – agreed to be part of this charade, and manipulated for a ZANU PF factional fighting cause.

Similarly, in spite of a 19 November ZANU PF emergency meeting to discuss demands for Mugabe to resign or face impeachment, this was also merely windowdressing – again, portraying a facade of democratic processes at work – yet, his fate was already as good as sealed, considering that he was in the hands of the military.

Additionally, Mugabe’s 17 November officiating at the Zimbabwe Open University (ZOU) graduation ceremony was designed for the same purpose of attempting at give an impression that he was a free man, and under no military duress, whatsoever, to step down.

Nonetheless, the coup de gràce came on 21 November, when Mugabe’s resignation was announced to conveniently coincide with a special sitting of the Parliament of Zimbabwe, at the Harare Conference Centre, to impeach him – again, as a portrayal of democratic processes in the works.

No matter what truly transpired behind closed doors between the military and Mugabe, leading to his resignation, the facts still remain that ordinary Zimbabweans’ mass marches on 18 November – five days after military generals issued their warning to him, four days after the military took over the nation and placed him under house arrest, and three days after the military announced their intervention on state media – one thing is unequivocally clear – ordinary Zimbabweans played no role whatsoever in the removal of Mugabe.

Whether people had gone onto the streets en masse, or not – that would have not changed anything, as Mugabe’s fate had already been sealed.

History is stubborn and can never be distorted, as any such malicious attempts will sooner or later be exposed.

This was not, by any stretch of the imagination, ‘the voice of the people’, nor was it a ‘people’s revolution’ – but, purely, unreservedly, and unquestionably a military coup d’etat – that had absolutely nothing to with ordinary Zimbabweans, but power politics within the ruling ZANU PF party.

No one, in both the local and international community should ever be deceived.

Is it then any wonder that the welfare and wellbeing of the people of Zimbabwe has never changed for the better, but has, in fact, drastically deteriorated?

Agriculture on recovery path despite challenges