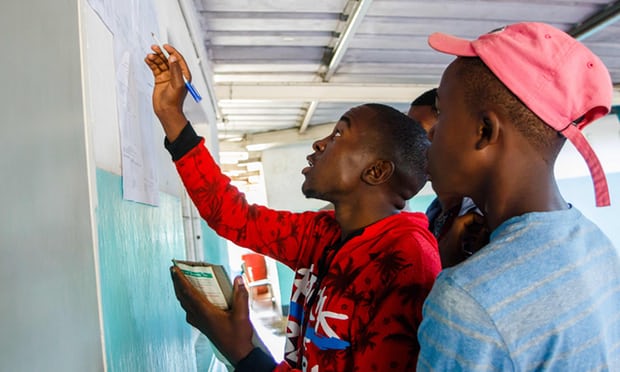 ‘Peaceful environment might be marred by violence’ after results announced, group says

Monitors in Zimbabwe have warned of violence if results from Monday’s election are contested.

Millions of people voted peacefully in the first poll since the army removed Robert Mugabe from power last year. Long queues of voters formed outside polling stations, and turnout was recorded at 75%.

The Zimbabwe Election Commission had said it would start announcing results from 3pm local time (2pm BST) on Tuesday, but a press conference was delayed.

“The fear is that people are going to be disgruntled to the point where they go into the streets and then there is a worry what the response will be from the security forces in the country,” said Andrew Makoni, of the Zimbabwe Election Support Network (ZESN), a coalition of civil society groups that deployed 6,500 monitors during the vote.

“Our peaceful environment before and during the voting process might be marred by violence after the announcement of the results.”

The opposition leader Nelson Chamisa claimed early on Tuesday morning that he was “winning resoundingly”. His supporters gathered at their headquarters in the capital on Tuesday afternoon, celebrating in the belief that they have won the election despite the lack of official results.

The supporters were dancing to music blaring from speakers mounted on a truck at the offices of the Movement for Democratic Change party, which says it conducted its own count.

The election pitted Chamisa, 40, a lawyer and pastor whose only experience of power was a stint as a minister in a coalition government several years ago, against Emmerson Mnangagwa, 75, a longtime Mugabe aide and head of the ruling Zanu-PF party.

Chamisa said in a 5am tweet that the MDC had “done exceedingly well”, according to results from a majority of polling stations. There was no confirmation of his claim.

Officials are constitutionally obliged to publish results from each of the 10,985 polling stations. Several civil society groups are collating these, though they are not allowed to release full results before the official tally is known.

Activists said the results were still too close to call but the general trend appeared to be in the opposition’s favour.

Makoni said the ZESN was working to confirm reports from activists in the field that as many as a fifth of polling stations had not published results. This would mean the results of up to a million ballots cannot be independently verified.

Mnangagwa tweeted on Tuesday morning that he was “delighted by the high turnout and citizen engagement so far”. He added: “The information from our reps on the ground is extremely positive! Waiting patiently for official results as per the constitution.”

The two candidates represent dramatically different ideologies and political styles, as well as generations. Pre-election opinion polls gave Mnangagwa, a dour former spy chief known as “the Crocodile” for his reputation for ruthless cunning, a slim lead over Chamisa, a brilliant if sometimes wayward orator.

Early polling station results seen by the Guardian showed Chamisa winning by wide margins in urban strongholds and in parts of the strongly anti-government south-west.

Support for Zanu-PF historically has been deepest in rural areas, particularly the party’s Mashonaland heartland, where more than two-thirds of Zimbabwe’s 17 million people live. People in the remote north-east appear to have voted by a wide margin for the government.

Chamisa’s claims of imminent victory are consistent with a strategy over several weeks that has sought to put Zanu-PF on the defensive and make rigging more difficult.

Zimbabwean electoral officials said they had not seen any evidence of rigging or cheating, while international observers told the Guardian the polls had been “normal”.

If no candidate wins more than half the votes, there will be a runoff in five weeks, though analysts believe this scenario is unlikely. In 2008, dozens of people were killed before a runoff between Mugabe and the MDC’s founder, Morgan Tsvangirai, who died from cancer in February.

Another possibility is negotiations to form a coalition government if the result is very close.

There are widespread fears among opposition activists and supporters that the government or the military could refuse to cede power if defeated. This would provoke massive protests, MDC loyalists have said.

Although the campaign has been free of the systematic violence that marred previous polls, the MDC has repeatedly claimed it has been hindered by a flawed electoral roll, ballot paper malpractice, voter intimidation and handouts to voters from the ruling party.

Makoni said the ZESN had found evidence of significant differences in the rates of registration of rural and urban voters, and old and young. The opposition is more popular among a more youthful demographic in cities and towns where, the monitors found, registration rates had been lower.

The MDC has repeatedly accused the election commission of bias, and many of their allegations have been supported by independent analysts and experts.

Zimbabwe’s rulers know that a fraudulent election would block the country’s reintegration into the international community and deny it the huge bailout package needed to avoid economic meltdown.

Almost four decades of rule by Mugabe has left Zimbabwe with a shattered economy, soaring unemployment and crumbling infrastructure. Mnangagwa has stressed foreign investment and unity during campaigning.

For the first time since Zimbabwe gained independence in 1980 after a brutal guerrilla war against a white supremacist regime, Mugabe was not on the ballot paper. On Sunday the former president said he would not vote for his former party, Zanu-PF, or the current president, and endorsed Chamisa.