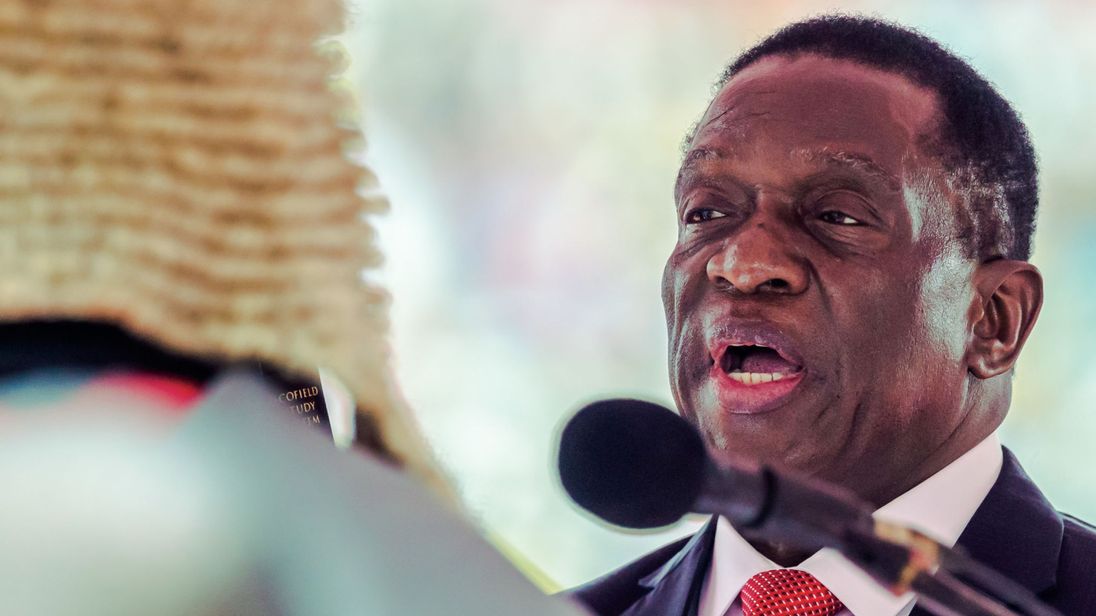 The leader of the MDC Alliance Nelson Chamisa tells Sky News that he is unconvinced by President Mnangagwa’s transformation.

In Zimbabwe, national elections can be a dangerous business.

But this troubled nation is about to try it again – and for the first time, Robert Mugabe’s name will not be on the ballot.

The long-time former dictator was deposed in a coup last November and now spends his time under virtual house arrest in a 25-room palace built to a Chinese design.

He was removed by one of his closest aides and personal enforcer – Emmerson Mnangagwa – and the country’s weighty problems now rest on the aging shoulders of this 75-year-old.

However, President Mnangagwa is trying something new, embracing democracy and international trade and commerce after his predecessor’s policies brought about a near collapse in the economy and an unemployment rate of more than 90%.

Part of his programme includes offering himself up as one of 23 candidates in the country’s presidential election scheduled for Monday and Mr Mnangagwa has personally guaranteed the poll will be free and fair.

Zimbabwe’s president has plenty to gain from a convincing victory in terms of political legitimacy and the prospect of investment – but the leader of the largest opposition party, the MDC Alliance, does not buy this transformation.

Speaking to Sky News, 40-year-old Nelson Chamisa told me: “Now he is saying that Zimbabwe is open for business. But who closed it 38 years ago?

“Now he says there is a new dispensation, but who was a key player in the old dispensation? You know, he cannot pretend to be born again.”

At an MDC Alliance rally in a township outside the capital Harare, people were scathing about the president’s democratic credentials. “Ha ha, real democracy, my foot, not Mnangagwa,” said one man. “He was as the side kick on Mugabe. They were cronies for years.”

The 7,000-member ‘We The People’ monitoring group have received testimony from hundreds of voters alleging harassment, intimidation and acts of violence by members of Mnangagwa’s party, the ruling ZANU-PF.

For some, that sounds uncomfortably close to 2008 when Mr Mugabe lost the first round of the presidential election to the MDC’s Morgan Tsvangirai. Between the election and the run-off, ZANU-PF and the military carried out a nationwide campaign of violence, killing more than 80 opponents and badly injuring Mr Tsvangirai himself.

Nelson Chamisa told Sky News he is not scared and is prepared to resist if he thinks ZANU-PF has interfered in the result.

“We know that victory is ours, we have won this election. The MDC is the only game in town but if they cheat, if they try and rig it, we have plans afoot to defend our vote.”

“We will see violence and chaos?” I asked.

“We will resist, I say this now, we will not allow the manipulation of the voters. I cannot be a leader promising anarchy but what I can tell you that the people are agitated and they know this government has a track record of cheating. We will not go down that path again.”

For those international observers invited by President Mnangagwa to observe the poll, an election without wide-spread violence would be a victory of sorts. But real democracy in Zimbabwe will take years to develop.